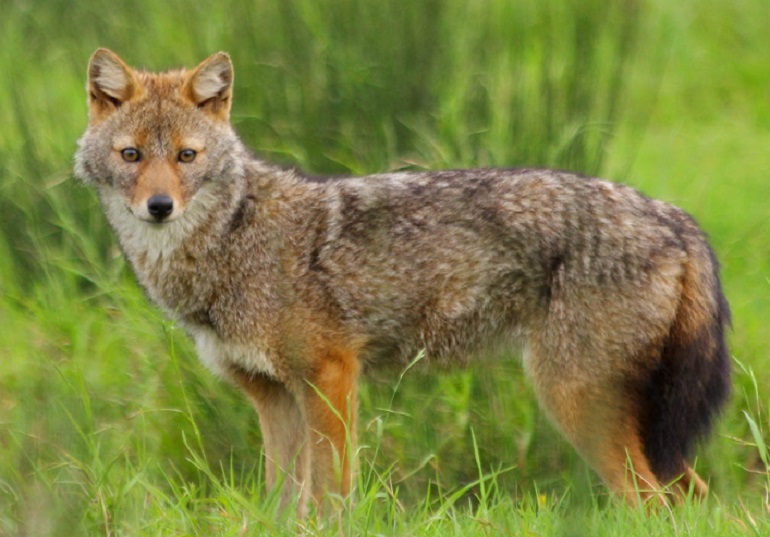 The jackal is a small, secretive member of the dog family Canidae (genus Canis) that inhabits Africa and parts of Asia. Jackals are omnivorous mammals, opportunistic predators that typically hunt alone or in pairs. They are relatively long-legged and lean, with long muzzles, erect pointed ears, dark brown or black fur, and bushy tails.

There are three species of jackal: the golden, black-backed, and side-striped. All three are very similar in appearance and habits, but each has unique characteristics. Jackals are shy animals that live in harmony with predators such as lions and hyenas. Jackals also scavenge from larger predators’ kills or steal food from human settlements.

The most common jackal is the golden jackal, which inhabits Africa north of the Sahara Desert and parts of Asia. The black-backed jackal is found in southern Africa, while the side-striped jackal occupies central and eastern Africa.

This post will take a closer look at these animals and learn more about what makes them unique. Enjoy reading!

The jackal is a small to medium-sized canid native to Africa, the Middle East, and South Asia. Smaller than the closely related grey wolf, it occupies vast areas of the Northern Hemisphere. The jackal is listed as the least concern by the International Union for Conservation of Nature (IUCN) because of its wide range in the developing world and its relatively stable population.

Etymology: Canis aureus was the scientific name used by Carl Linnaeus in 1758 for the golden jackal. The word “jackal” has several derivations. English lexicographers regard it as either borrowing from Persian shoghāl or possibly an alteration of Sanskrit sṛgāla-.The latter would make it a cognate of another Persian word, sag (“dog”). Common folk etymology is derived from moughi, “spotted beast.” It may also be derived from the name for the black-and-white striped animal called tiger in many languages.

In Hindu mythology, the jackal is depicted as the trickster god, typically taking the form of a clever fox or wolf. In some stories, such as those written by Rudyard Kipling, it is also seen as a more malicious creature that preys on people and animals. The jackal is also mentioned in the Bible, referred to as “the creature of the night.”

The golden jackal is a medium-sized canid with a broad head, large ears, and a long tail. It is similar in appearance to other members of the Canis genus but has a more elongated muzzle and less bushy tail. Its fur ranges in color from pale gold to reddish brown and often has dark patches on the back and sides. Melanistic and albino individuals have also been recorded. Adult males typically weigh 9–10 kg (20–22 lb), while females weigh 5–6 kg (11–13 lb). They measure 60–75 cm (24–30 in) in body length and 30–50 cm (12–20 in) in shoulder height. The tail measures 29–44 cm (11–17 in) in length.

The jackal has a wide range that extends from Africa to Southeast Asia and the Indian subcontinent. It is found south of the Sahara Desert in Africa from Senegal to Ethiopia and Somalia. It is also found in Djibouti, Eritrea, Kenya, Tanzania, Uganda, and northern Mozambique. In Asia, its range extends from the Arabian Peninsula through Iran and Afghanistan to India and Southeast Asia.

Most jackals are opportunistic predators and scavengers, meaning they will eat whatever food they are available. A few are specialized eaters; for example, the Ethiopian wolf feeds almost exclusively on Afroalpine rodents, while the side-striped jackal of southern Africa subsists largely on termites. They will also eat reptiles, birds, eggs, fruits, vegetables, or insects. When food is scarce, jackals have been known to kill and eat larger animals, such as antelope, wildebeest calves, and even ostrich chicks. They typically hunt alone or in pairs rather than in a pack like a wolf or African hunting dog.

How Strong Is a Jackal’s Bite?

A jackal’s bite is not as strong as that of a lion or a tiger, but it is still powerful enough to cause serious injury. The average jackal’s bite force is about 776 pounds per square inch (psi), which is significantly weaker than the average tiger’s bite force of 1050 psi. However, a jackal’s teeth are sharp, and their jaws are powerful, so they can still inflict serious damage with their bite. Their bites are particularly dangerous to small children and animals. It can kill small prey with a bite to the neck, but it cannot break the skin of larger animals.

Jackals are relatively social animals, and pairs or small packs consisting of a mated pair and their offspring often den and hunt together. Larger groups of up to 20 animals have been observed, but such groups are generally unstable and quickly break apart into smaller family units.

It is mostly nocturnal but can also be active during the day. It is an excellent climber and swimmer and often climbs trees in search of food or to escape predators. Although it typically avoids contact with humans, it has been known to attack people if cornered or threatened.

Jackals tend to mate for life, and pair-bonded couples typically remain together until one member of the pair dies. Jackals reproduce sexually, with the male and female jackals coming together to mate. After a gestation period of around 60-70 days, the female jackal will give birth to a litter of anywhere from 2-6 pups. The pups weigh 350–550 g (12–19 oz) at birth and are born blind and deaf. They will begin to open their eyes after about two weeks and will be able to walk and run after around four weeks. At six weeks old, they will start to eat solid food but will continue to suckle milk from their mother for several months.

Most jackals will reach sexual maturity at around one year old but may not breed until they are two or three years old. The average lifespan of a jackal in captivity is 12 years, but it can be up to 20 years. In the wild, its lifespan is around 8- 10 years due to predation and disease.

The main difference between a jackal and a coyote is their size. Jackals are smaller than coyotes, with slender bodies and pointed muzzles. Coyotes are larger, with broader heads and more prominent ears. Another difference is that jackal lives in Africa, while coyote is found in North America.

No, jackals do not typically eat humans. While they are opportunistic predators and will feed on whatever is available, their diet does not typically include human beings. Jackals are more likely to scavenge than to hunt, and they prefer smaller prey such as rodents or hares. In rare cases, jackals may attack humans if they feel threatened or desperate for food, but this is not a common occurrence.

While jackals typically avoid humans, they have been known to scavenge from human campsites and villages if given the opportunity. In some areas of Africa, people will put out food specifically for jackals, as they believe jackals help keep the population of rodents and other pests down.

The golden jackals and the side-striped jackals are listed as Least Concern on the IUCN Red List of Threatened Species. Although its population is considered stable, it is still hunted for its fur and meat in some parts of its range. It is also considered a pest by farmers as it can kill livestock. However, the biggest threat to the golden jackal is habitat loss due to human activity, such as deforestation, urbanization, and agriculture. The African wildlife foundation is working to conserve the golden jackal’s habitat and help reduce conflicts between humans and jackals.

The Jackal is a medium-sized canine that is found in Africa. Jackals typically live in packs and have a strong bite. They are opportunistic omnivores but do not typically eat humans. If you’re ever in the vicinity of a jackal, it’s important to remain calm and avoid making any sudden movements that could startle the animal.