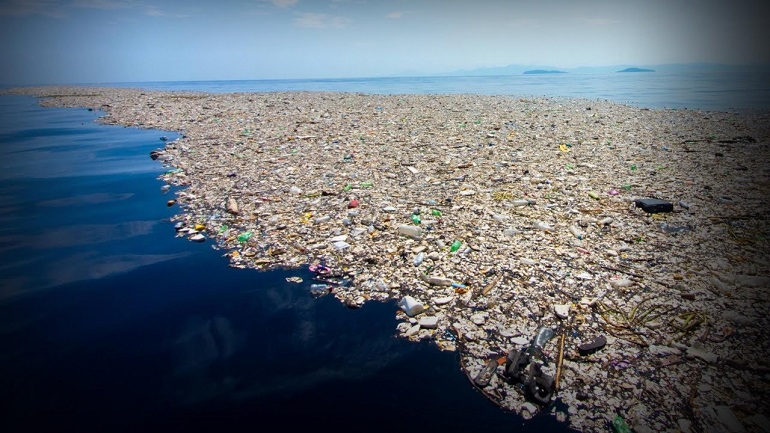 What Is the Issue?

Our oceans sustain life. An abundant ocean can feed a billion people a healthy meal forever. But now they are being filled and killed by throwaway plastic that seriously threatens ocean health.

Plastic waste is entering our oceans at a staggering rate of 11 million tons of plastic a year. This is the equivalent of one garbage truck full of plastic dumped into the sea every single minute. This amount of pollution will double by 2030 and quadruple by 2050.

Plastic debris is everywhere in our ocean: floating plastics on the surface ocean, mixing in the saltwater, sitting on the ocean bottom, and plastic ingestion by marine species. This impacts deep-sea sediments.

Once in the ocean, it never goes away. Over hundreds of years, it breaks down into small pieces, but those pieces full of toxic contaminants stay in our oceans forever.

What Is the Problem with Plastic?

Marine plastic pollution has become a critical challenge of our time and is a global problem. Plastics are the largest, most harmful, and most persistent fraction of marine litter.

Smaller pieces, known as micro- and nano-plastic, travel through the air and water column, breaking down from larger pieces or coming from the abrasion of tyres, or loss of microbeads, clothes fibers, or paints. These particles enter the food cycle.

We will take a closer look at each of these problems in the next few sections of this article.

Why Is It Important to Resolve This Problem?

The damage caused by plastic pollution is multifold. It poses a huge threat to the livelihood of different communities, deterring our social well-being, contributing to climate change, and altering our natural processes and habitats.

For this multidimensional impact, there is a strong need to take multilateral action by countries around the globe.

Initially a mineral resource, the building blocks of all plastics are pellets which are shaped into different products. At the end of their life, plastic items can be incinerated or recycled, but an important majority are improperly discarded and accumulate in landfills or the environment.

Plastic pollution is caused by inadequate waste management systems as well as by microplastic leakages during the lifespan of plastic products. Sewage systems, rivers, and discarded items at sea, such as ghost nets, are some of the ways plastic enters our oceans.

There are serious ecological impacts of plastic waste entering our rivers and oceans. First is when big or small ocean creatures get entangled in some form of plastic cable and end up dying. The second serious impact is ingestion, where our marine life ends up swallowing marine debris.

Sea turtles are choking on plastic materials found in the marine environment. Scientists say that over 60 percent of whale and dolphin species are affected by plastic debris. The base of the ocean food cycle is plankton, which ends up consuming a lot of micro and macro plastics.

Plastics contain toxic chemicals, and these toxins can leach from the plastic, potentially polluting the animal.

A lesser well-known fact is that plastic can actually absorb toxins onto its surface, and this can take concentrations of PCBs, PHAs, and other organic pollutants from the ocean. The resultant is a highly concentrated piece of toxic plastic that can enter the food chain.

Bacteria and algae can form biofilms around plastic pieces and can be transported by ingesting plastic. The result is invasive species in our pristine marine habitats or increased pathogens in the food chain.

Another 4 percent is burned off in the refining process. Plastic production involves making the building blocks of many common plastics and releases as much carbon dioxide as 45 million passenger cars.

Second, the incineration of plastic leads to air pollution. This is because approximately a quarter of plastic waste is burned. This generates devastating pollutants such as black carbon, the global warming potential of which is up to 5000 times greater than carbon dioxide.

As well as poisoning the air, plastic trash harms the environment. This is because only 20 percent of all the plastic is recycled, and over half is dumped in the open air.

The ocean is one of our biggest natural carbon sinks. Tiny marine organisms, called phytoplankton, absorb 40 percent of the carbon dioxide produced.

However, plastic pollution releases microplastics, which smother the plankton activity. Hence, the third biggest problem caused by it and leading to climate change is that plastic reduces the ocean’s ability to absorb carbon dioxide.

●    Impacts on Food and Human Health

Plastic is not only an environmental issue, it threatens food safety as well. Our health and the health of our future generations may be at risk too because ingested plastic is inside us.

It is in the water we drink and in our food. Microplastics have been found in our salt, our honey, our beer, and sometimes even in the air we breathe.

This means we eat, drink, and breathe microplastics every day. In fact, based on a report by WWF, “an average person could be ingesting approximately 5 grams of plastic litter every week.”

Plastic products contain chemical additives, a number of which have been associated with serious health problems. There is an increased risk of cancer and endocrine disruption leading to a change in hormonal activity. This can lead to problems in reproductivity and growth, as well as cognitive impairment.

Plastics and microplastics can also attract microorganisms, such as harmful bacteria, which may increase our risk of infection. Microplastics also serve as vessels for pathogens that enter our digestive system and increase the risk of various diseases.

As a single large employer in the ocean economy, the tourism and recreation sector holds significant importance.

The reliance of this sector on the visual quality of our beaches and healthy ocean and coastal resources brings us to question the impact of plastic pollution. Because nobody likes to visit beaches covered in all forms of plastic debris, right?

There are two main impacts of marine pollution on the tourism sector. The first is that the pervasive nature of plastic items is having a negative impact on ecotourism attractions.

This results in a downward trend in the number of tourists in these spots and, in turn, leads to a lower tourism revenue due to marine pollution.

This means that there is not only reduced effort toward tourism development, but the private investments in tourism infrastructures, such as hotel, is also reduced.

In the near future, it is predicted that water activities that are dependent on a healthy coastline, such as diving, snorkeling, fishing, and ocean expeditions, will also experience astounding declines.

A second major impact is on the local fishing and other communities. When you have lesser people spending money on tourism, it will undoubtedly lead to a decline in local jobs.

The negative impacts on tourism, as discussed in this section, will continue to multiply if nothing is done to curb the effects of ocean plastic pollution.

What Can Be Done to Resolve This Problem?

By this point, it is fairly obvious that if we don’t take action, there could be more plastic than fish by the end of 2050.

Every day, around the world, we use millions of single-use plastics. We need to shift from today’s linear take-make-and-dispose model to a more circular economy plastics value chain, where products are designed to be reused and recycled in order to reduce plastic debris.

These innovations are still at an early stage and require proper management and disposal mechanism.

One of the less commonly known problems of plastic is that we add dyes and other aesthetics when designing all the plastic items.

These can seriously impact the efficiency and economic viability of recycling plastic. So it is time we think about how important these added features really are when designing plastics.

The MarPlastics initiative was launched in 2018 in five countries: South Africa, Korea, Mozambique, Thailand, and Vietnam, with the ambition to expand its geographical scope.

As you can see, recycling in one form or another is the key solution to the problem of marine plastic pollution.

In summary, plastics are being produced in huge volumes, and they travel great distances. They have toxic films around their surface and non-native species potentially spreading all over the globe.

So, it is important that we start thinking about the problems that can be aggravated by plastic use. Million tons of plastic that is disposed off and does not go through the proper waste management process.

Let’s stop plastic pollution from wrecking our beaches and impacting marine life. Let’s pledge to improve the world’s oceans that delight and sustain us for generations to come.

The idea is to move to a circular economy where we reduce landfills, prevent leakage from landfill, and increase the feasibility of recycling. In this way, we can stem the ecological impacts of plastic pollution.