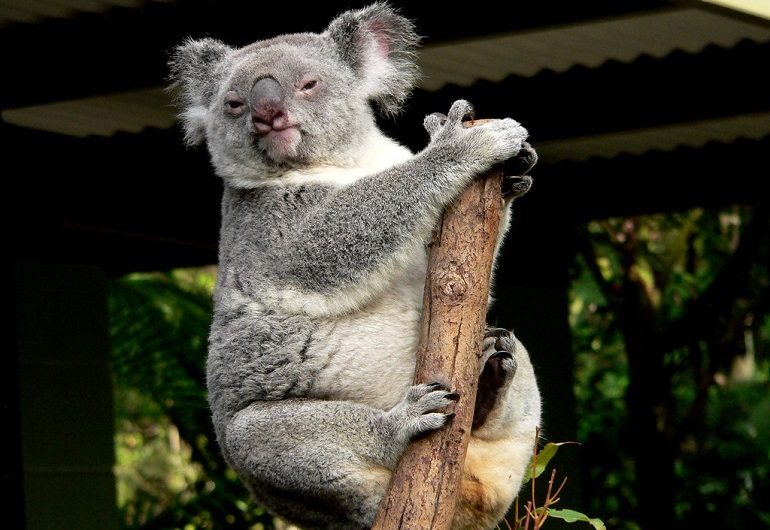 Koala, also called koala bear, is one of Australia’s most iconic animals. Koalas are loved for their cute, teddy bear-like appearance and playful nature. These animals are not bears, despite what their appearance might suggest. Koalas are more closely related to the Australian mammals’ kangaroos and wallabies than bears.

Koalas are about the size of a house cat and have gray fur with white patches on their chests. Koalas are marsupials, which means they carry their young in a pouch. Koalas tend to live in habitats called ‘marshes’ or ‘ecological corridors.’ These habitats provide enough trees to support the koala’s diet and offer shelter from predators and harsh weather conditions.

The word “koala” comes from the Aboriginal Australian word for these animals, which means “no drink.” They can survive on other types of leaves, but eucalyptus is their most nutritious food source. Native to Australia, these animals are known for their soft fur, big eyes, round ears, and long claws.

This post will take a closer look at koalas and some things that make them special. Read on and enjoy a variety of interesting koala facts.

Here Are Interesting Facts about Koalas

Koalas (Phascolarctos cinereus) are one of the world’s cutest animals, but there is much more to them than meets the eye. Here are some interesting facts about these cuddly marsupials.

Koalas Are Not Bears – They Are Marsupials!

Most people think koalas are related to bears, but this is not true. Koalas are marsupials, which means they carry their young in a pouch on their stomach. A baby koala, called a joey, stays in its mother’s pouch for about six months. Once it is old enough to leave the pouch, the joey will ride on its mother’s back until it is about a year old.

Koalas Are Native to Australia

Koalas are native to Australia and can be found in the eucalyptus forests of Queensland, New South Wales, Victoria, and South Australia.

Koalas are well-adapted to life in the trees and spend most of their time high up in the branches. They have strong claws that help them climb and even sleep in trees!

Koalas Don’t Have to Drink (Much) Water

Koalas get most of the moisture they need from eucalyptus leaves, which are very high in water content. Koalas eat eucalyptus leaves that would meet their water needs, although they do drink water occasionally.

Eucalyptus leaves are also very low in nutrients, so koalas have to eat a lot of them to get enough to survive. An adult koala eats about half a kilogram (1 pound) of leaves daily.

Koalas Have A Slow Metabolism

Koalas have a very slow metabolism and digest their food slowly. This is an adaptation to the low-nutrient diet they consume. They have a specialized digestive system that allows them to digest the toxic compounds in the leaves.

Koalas are generally solitary animals. Males and females come together only to mate; even then, they don’t stay together for long. After mating, the male koala leaves, and the female raises the joey on her own.

Koalas are fussy eaters. They only munch on eucalyptus leaves and are very particular about which ones they choose. Out of the hundreds of different types of eucalyptus trees, koalas will only eat around 40. They might choose the top leaves of the tallest eucalyptus tree.

Baby Koalas Are the Size of Jellybean

Koala babies are called joeys. When they’re born, they’re only about the size of a jellybean and weigh less than a gram. They spend the next six months or so clinging to their mother’s belly before venturing independently.

Koalas Are Slow on the Ground

Koalas are one of the world’s slowest animals, capable of only moving at around one meter per minute.

Koalas are very good swimmers and have been known to travel up to half a kilometer in water to reach the other side. Koalas can stay afloat for long periods and are excellent climbers, which helps them escape predators.

Koalas Are Quite Territorial

Despite their cuddly appearance, koalas can be quite aggressive towards one another and are known to fight for territory. Males, in particular, are quite territorial and often mark their territory with urine or by scratching trees.

Koalas have few natural predators but can fall prey to dingoes, dogs, and foxes. If a predator attacks a koala, it will usually try to defend itself by using its sharp claws.

Koalas typically live between 13 and 18 years in the wild, though koalas in captivity have been known to live longer.

When they are not eating or sleeping, koalas spend most of their time grooming themselves. They spend most of the time every day cleaning their fur! Koala uses their back claws on their hind paws to comb the fur and groom the whole body. Koalas have been observed to groom with their front claws; however, this was an uncommon behavior.

Koalas are generally loners. They are not very social animals and prefer to live by themselves. However, they will sometimes gather in groups of two or three if plenty of food is available.

Koalas Can Sleep up to 18 Hours a Day

To conserve energy, koalas sleep up to 18-20 hours daily. They spend most of their waking hours eating and the rest relaxing in trees.

Is Climate Change an Effect on Koalas?

A recent study that was published in the journal Nature Climate Change found that climate change is indeed affecting koalas. The study found that rising temperatures and changes in rainfall patterns are causing koalas to suffer from dehydration and malnutrition, which in turn is leading to lower birth rates and a decline in the population.

While the findings of this study are certainly alarming, it is important to remember that koalas are resilient species and have survived for millions of years. With our help, they can continue to thrive in the future.

Here are some things you can do to help protect these adorable creatures:

Female koalas have two nipples in their pouch, which the joey (baby koala) will attach to once it is born. The joey will stay in the pouch for about six months, after which it will explore outside the pouch and eventually start living on its own. Male koalas do not have a pouch, but they do have a scrotum that holds their testicles.

The International Union for Conservation of Nature lists koalas as an endangered species. In recent years, the koala numbers in Australia’s coastal areas have declined by a shocking 40%.

This is due to several factors, including habitat loss, deforestation, hunting, fragmentation, disease (particularly chlamydia), and predation by introduced species such as foxes.

Although many volunteers and organizations, such as the Australian koala foundation, are working to protect koalas, their future in wildlife is uncertain. With luck, many koala populations will start to rebound in the years to come.

Koalas are one of the most popular and easily recognizable animals on the planet. They are also one of the most unique, with their furry ears, stubby noses, and tree-climbing abilities. While they may look like cuddly teddy bears, koalas are quite different from most other animals.

They are a vital part of the ecosystem. They are an essential part of the food chain and help to keep the environment healthy. Koalas are also a popular tourist attraction, which helps to boost the economy.

However, climate change is a major threat to koalas and their habitat, and we must do what we can to help protect them.