Parti Schnauzer – Is it the Right Dog For You? 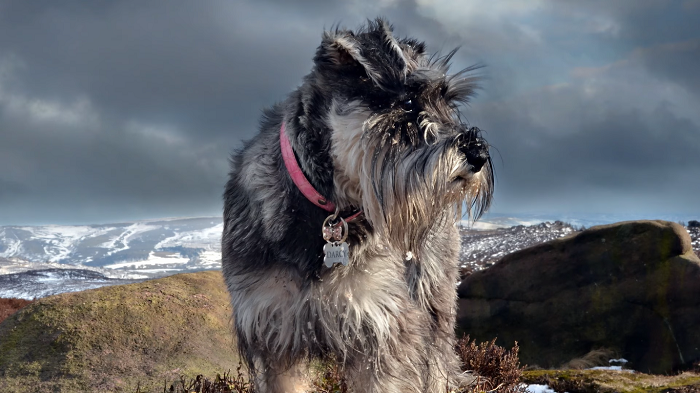 Before we talk about Parti Schnauzer let’s talk about what a Schnauzer breed really is. Have you seen the furry teeny tiny dog in Mr. Bean, who has always been a pain in the neck of that poor human? The dog with Rapunzel-like hair that you can almost tie a braid with? That is a breed of Parti puppies.

Part Schnauzers are a breed of dogs that are small in size, but they are as friendly and active as other breeds who enjoy outdoor activities.

A Parti Schnauzer is a “parti” colored schnauzer puppy where the addition of this prefix “parti” refers to the pattern of white hair on the base color of the dog.

Parti, which literally means “with white patches” can stand out with every possible base color. It does not matter if the base color is black, white, salt and pepper, or black and silver.

Some of the Parti miniature Schnauzer breed dogs are so white they almost start to look like white dogs with different color patches.

The thick bundle of silky smooth hair of miniature Schnauzer needs to be perfectly brushed to prevent mats and tangles and requires trimming every couple of months.

History of the Parti Schnauzers

If we go back to the early ages, we cannot truly identify the origins of miniature Schnauzers. The only thing we know for sure is that they began their life as farm dogs in Germany between the 14th century and the 16th century.

Thus it is widely believed that they were bred from Standard Schnauzers, Affenpinschers, and Poodles. However, it was not until the 1950s that they became quite notable.

Parti miniature Schnauzers have a very dreadful history, and it is known that they became the severe victims of inhumanity.

In 1933, during the Third Reich in Germany, the Pinscher Schnauzer Club (PSK) restricted the reproduction of this breed as they were seen as a threat to society. This was done by suffocating and stoning them to death.

One of the reasons was that the wire-haired Fox, which looked exactly the same as this dog breed, caused confusion among the public.

Another reason was that Parti Schnauzers would hurt and interfere with the sales of Salt & Pepper puppies of the Royal Club Members, and thus eventually these white patch dogs vanished from Germany and Europe.

Some breeders, however, continued breeding them secretly, and some smuggled them out of Germany in order to not get caught. This was done in order to preserve this dog breed.

Joseph Berta (the previous executive director of PSK) and Richard Strebel appealed to the authorities to reconsider their decision and allow them to raise Parti Schnauzers again, but this went futile until World War 2.

However, Parti Schnauzers were reproduced interestingly by the Royal Lady Kanitz at Abbagamba Pet Hotel. It is a well-known fact that four dogs of this breed entered the United States in 1924, and the American Kennel Club officially recognized this breed in 1926.

Now that we are aware of the history and main characteristics of the Parti Schnauzer, let us take a look at some of the fun facts about this dog breed.

Parti Schnauzers are beautiful breeds. They are robust, muscular, and fearless without being aggressive because they were bred to be all-purpose farm dogs and ratters.

A tall head and a nose with a rectangular shape are characteristics of the Parti Schnauzer. They have little, almond-shaped, and dark small eyes.

Their cranium is in close proximity to their V-shaped, drooping ears. A long straight back characterizes them.

Size-wise, the Standard Parti Schnauzer is a medium-sized dog. At the shoulder, the standard schnauzer has a height that ranges from 17 to 20 inches.

They do not shed much because of the two layers of their fur — a soft undercoat and a wiry top coat.

However, they still need to be groomed frequently to prevent the top coat from tangling. This can be quite painful if ignored for an extended period of time.

Parti refers to a dominant base color that is broken up by large or small patches of white. There are numerous base colors that can be derived from this definition.

Salt and Pepper Parti, Black and Silver Parti, and Liver/Tan Parti are all variations of the parti color and pattern.

The Parti Schnauzer is an outgoing breed that enjoys playing. They are also extremely intelligent and simple to teach. Parti Schnauzers are good family dogs and get along well with kids.

This dog breed has a bubbly disposition with lots of enthusiasm for being outgoing. They have a personality twice their size and are fairly talkative, in addition to being flexible and family-friendly.

When taking a Parti Schnauzer out for a walk or daily exercise, it is wise to keep the dog on a leash. This is because this breed has an inherent prey instinct that drives them to attack anything small, furry, and in motion.

If left untrained or untamed, the Parti Schnauzer can prove to be more toward the aggressive side. This is not true in the case of well-trained dogs.

Early socialization is really beneficial for this playful breed because they can be slow to warm up to other dogs but are glad to meet new people.

Because of their stubbornness, Parti Schnauzers demand a firm but patient hand despite their great intelligence and typical ease of training.

Parti Schnauzers need an everyday workout to remain solid and blissful. An energetic walk or run will do the trick. They likewise need a lot of mental excitement in the shape of puzzle toys, dog sports, and different exercises to forestall weariness.

When it comes to their grooming, they should be brushed weekly, and their nails should be managed routinely.

In terms of their nutrition, they love to gulp chicken or oatmeal, dry dog food, and high-quality dog food.

Hip dysplasia is a disorder that develops in dogs as they are growing. In this condition, the hip joint becomes looser and, as a result, leads to dysfunction and discomfort.

The dog’s hip cartilage and bone start to deteriorate as the condition progresses. This results in arthritis, muscular atrophy, and decreased mobility over time.

Hip dysplasia is an inherited disease. Dogs with these conditions should not be further bred.

Hence, if you find your Parti Schnauzer has this condition, it is very important to inform the breeder about this condition. As a responsible breeder, the further development of this dog from the parent dogs will be stopped.

Another hereditary disorder that can affect Parti Schnauzers is Von Willebrand’s disease. This prevents the body from effectively clotting blood. The illness comes in three different types.

The most prevalent type, Type I, is the one to which Parti Schnauzers are somewhat susceptible. It only results in slight to severe bleeding.

The lifetime risk of pancreatitis in Parti Schnauzers may be around 5 percent. However, it is currently unclear what causes this susceptibility to occur genetically.

In this condition, digestive enzymes produced in the pancreas for use in gastrointestinal digestion become active in the pancreatic tissue. The ensuing damage can be severe and acute, and it can result in excruciating pain.

However, it is believed that the disease process is typically more progressive, and this is likely to result in periods of chronic lower-grade pain.

Parti Schnauzers are clever canines that can be effectively trained by utilizing positive reinforcement techniques and reliable strategies.

The first thing you want to address when training your Parti Schnauzer is habitual barking. At the point when you are training them to scale down their barking, what works best is to disregard the bark totally.

By acknowledging or recognizing the woofing, you will wind up empowering it further. When your canine quits yapping, reward your canine and give your pet a few most loved treats.

When training your Parti Schnauzer, it is important to understand that a firm hand or harsh commands do not work well in their favor. Although it is not a very obstinate dog, you may end up endorsing undesirable behavior, and your dog might not respond well to your instructions.

The Parti Schnauzer is an extremely extraordinary and special variety that has numerous superb characteristics.

They are robust, muscular, and fearless without being aggressive. These dogs were bred to be all-purpose farm dogs and ratters. Dog breeds like Parti Schnauzers have docked tails, long feathery eyebrows, and unique beards.

What makes Parti schnauzers rare is the way they look, their coat color, and their overall appearance. Giant Schnauzers are rarer than miniature Schnauzers.

They are shrewd and adoring and make incredible buddies and companions for your family.

In the event that you are searching for a pet that you can fit into your family and lifestyle, think about the Parti Schnauzer! You will not be disheartened.