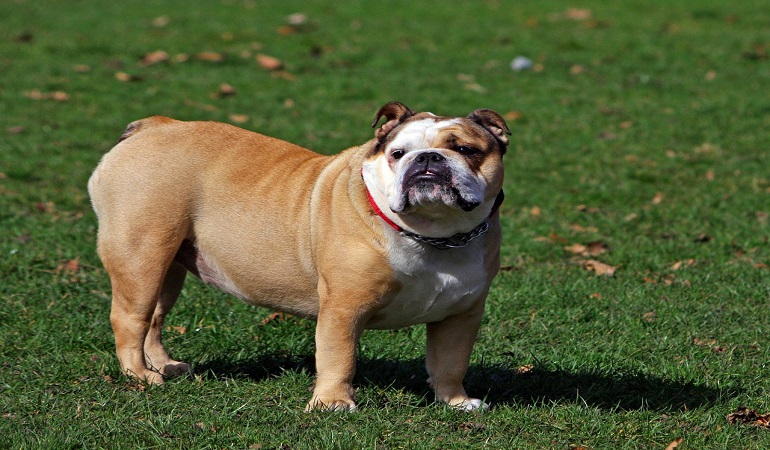 Is there any person on this planet who has never seen a bulldog? We guess, No! These aggrieved-looking, medium-sized dogs with muscular and hefty builds are one of the most owned dog breeds and it’s not without any reason.

With their gentle and sweet temperament, British Bulldogs make an excellent pet choice for families with kids and elders. And no, you should not trade for their wrinkled face and grumpy expressions since they own a firecracker personality.

At the same time, they act like real sweethearts as they love cuddles, enjoy human interactions, and prefer spending time with their families. However, despite such an adorable and loving disposition, we can’t say that the English Bulldog is easy to own and train.

After all, there’s a reason why Bulldogs are considered the symbol of tenancy, all around the world. After not receiving the required love, attention, and exercise, these dogs may grow a stubborn nature which could be almost impossible to correct.

Thus, if you’re planning to adopt a British Bulldog, here we’re going to jot down some details about this canine. Keep reading so you won’t have to face any problems regarding the health, care, and temperament of your newly adopted wrinkly dog.

Would you believe it if we say that this sweet-natured canine was used to participate in cruel bloody sports like Bull baiting? Yes, that’s true. This mastiff-type dog breed has crossed a very long path of evolution which made them develop numerous physical and behavioral adaptations over time.

However, the current form of this Bulldog breed comprises gentle, family-oriented, and affectionate canines that rarely show aggressive behaviors, under normal circumstances. Having a small-medium-sized build, these dogs are perfectly suited to apartment dwellers.

Even though they love staying busy and active, they don’t need a yard, let alone a wide yard, to vent their pent-up energies. Another plus point of these purebred dogs is that they don’t come with vigorous exercise needs and do well with moderate exercise.

In fact, English Bulldogs are not at all those outdoor canines who want to stay outside 24/7. In the case of English Bulldogs, they would love to see the world from the window, while lying aimlessly on the couch – and that’s why they are also a good pet choice for lazy dog owners.

However, consider adopting them only if you are living in temperate climates. During too-hot weather, these dogs may overheat quickly which makes them pant. This, in turn, might trigger breathing problems in them which may prove life-threatening down the road.

On the other hand, during too cold weather, they chill easily and might also get prone to hypothermia, making them incompatible in such regions.

Unlike American Bulldogs, these canines may exhibit different personalities and dispositions. For example, some Bulldogs could be more predictable and dependent than others. Likewise, some form strong bonds only with their family members, while staying reserved with others.

History of the English Bulldog

As stated before, English Bulldogs have a bloody past as they are believed to be the descendants of fighting mastiff dogs. In fact, this dog breed was originally bred for deadly, cruel animal sports.

Historians strongly agreed with the statement that English Bulldogs were developed by the cross between an extinct Alaunt dog and ancient Mastiff war dogs.

Likewise, almost everyone believes that these Bulldogs were developed in England, around the twelfth century, and were then brought to the British Isles, for bull baiting competitions.

For several centuries, these dogs were being used in those deadly, bloody sports but then in 1835, a ban was imposed on dog fighting and other similar sports. Since people of those times didn’t know how to use these dogs, in any constructive activity, they stopped breeding them.

And in this way, the ancient English Bulldogs got nearly extinct. However, people who still owned and admired these dogs, for their incomparable courage, stamina, and strength, decided to preserve this breed.

To promote its breeding, they showed people how Bulldogs can be used as guard dogs, to protect cattle from wild predators. However, the aggressive and extremely fierce temperament of old English Bulldogs became troublesome for Bulldog owners so they decided to abandon them.

After this, the dedicated breeders started working on selective breeding. They only chose Bulldogs with even and cool temperaments for breeding while preventing the breeding of neurotic dogs. So that’s how, the hot-headed English Bulldogs were transformed into cool-headed, social canines.

However, it was not until 196o that an English Bulldog made its way to its very first dog show; the Birmingham show. In 1961, a Bulldog named King won the show and grabbed the attention of dog lovers.

Considering the popularity of this English Bulldog breed, the very first Bulldog Breed Club was formed in 1864 and a man named Samuel Wickens wrote the very first breed standard for Bulldogs.

Unfortunately, this club stopped working after three years of its inauguration and a new Bulldog club was formed that’s still working to improve, promote, and preserve this breed.

This British Bulldog made its way to America in 1880; however, it took this breed six years to get registered with the American Kennel Club.

In addition to this, Bulldogs have characteristic two loose folds that hang loosely on the neck, between the chest to jaws, forming the dewlap. On the other hand, their large heads are completely covered by loose skin, forming heavy wrinkles.

Bulldogs generally possess a small size as even a fully grown male may only stand 40-41cm tall. On the other hand, mature females also grow to the same size as males (from 31-40cm).

Despite a short stature, the English Bulldog stands on the heavier end. The healthy weight range for adult males is 50-54 lbs whereas that for an adult female is 48-50 lbs.

Bulldogs come with straight, fine-textured, soft, and short coats. At first glance, it might look single coated but it’s double-coated in real. The top layer is relatively harsher than the undercoat.

The most common and standard coat color for English Bulldogs is solid white. However, color combinations can also be seen including brindle & white, fawn & white, red brindle, red & white, and piebald.

Regardless of how grumpy they seem by their faces or how strict they are shown in cartoons, Bulldogs are super friendly, playful, and goofy. If socialized and trained from an early age, they may turn pleasing and enchanting towards strangers too.

However, lacking socialization, they grow territorial and extremely possessive about their place and humans. Not only humans but if an English Bulldog is not raised with other pets of the family, he won’t accept those pets later and become unmanageable and intolerant around them.

At first glance, Bulldogs might seem aggressive but they don’t possess any accident streak, caused by their aggressive behaviors or biting.

However, these dogs are also known for their courageous temperament with which they can stand firm & fearless on the ground to protect their owner from all potential security threats.

And the best part of this dog’s temperament is that although it loves human attention the most, you can leave your adult Bulldog alone for eight to ten hours if trained properly. On the other hand, puppies can be left for three hours and no, they won’t develop separation anxiety on this.

However, it doesn’t mean that Bulldogs are not at all prone to separation anxiety. Since they are naturally non-sporting, companion dogs, they crave human interactions as they crave treats. If not getting enough of it, they might show destructive behavior, caused by separation anxiety and lack of mental stimulation.

Being purebred dogs, Bulldogs don’t come with the huge risk of inheriting diseases from their parents. But still, they might start catching diseases from a very young age which in turn, reduces their life span. Some of those most common health problems are as follows:

It’s a congenital disease in which the tracheal cartilage rings begin growing abnormally. As a result of this abnormal growth, your dog’s windpipe becomes narrow. Some symptoms which show that your canine is suffering from this condition are loud snores, labored breathing, whistling sounds with breathing, etc.

In this condition, hip bones and tight bones get partially detached from the pelvic socket. Resultantly, your dog experiences difficulty while walking – especially while moving his rear limbs. If diagnosed at an early stage, it can be cured by physiotherapy but in later stages, the only way to treat it is surgery.

Besides these issues, Bulldogs are also highly prone to developing skin infections. Due to this very reason, this dog breed falls into the category of high-maintenance dog breeds.

You need to brush their short, fine coats once a week. For this, get a sleek, soft bristled brush and remember that the more you brush their fur, the glossier and cleaner it will seem.

However, you need to rinse the area between their thick folds several times a week to remove dirt and moisture from there.

Likewise, trim their nail regularly (once a month) and brush their teeth regularly to prevent dental issues.

Since they are not hyperactive, a one-hour-long play session will be enough for them. However, you also need to remember that low exercise and small stature might make them prone to become overweight.

Therefore, it’s important to discuss your dog’s portion size with your vet thoroughly and feed him only high-quality dog food. Never make your dog exercise heavily to burn extra calories since it could do more harm than good.

Instead, to keep them mentally engaged and happy, indulge them in a sport that requires decision-making skills.

Even though Bulldogs are super affectionate & docile and can fight off the wildest animals to protect you, they are not programmed to obey you. Therefore, when training them, gather as much patience as possible.

As we mentioned above, bulldogs can sometimes become extremely stubborn after which, no one in this world can make them do what they don’t want to. So if your Bulldog is showing such behavior, stop the training procedure in the middle and wait until he seems eager to learn.

Luckily, Bulldogs are quite intelligent due to which they can learn basic commands very quickly. Just make sure to keep practicing the same commands, so your dog won’t forget them. Lastly, regardless of what you are trying to teach your Bulldog, always use positive reinforcement methods.

Whether you choose to purchase your Bulldog or to adopt it, just don’t forget to check for some basic health clearance certificates, issued by the orthopedic foundation.