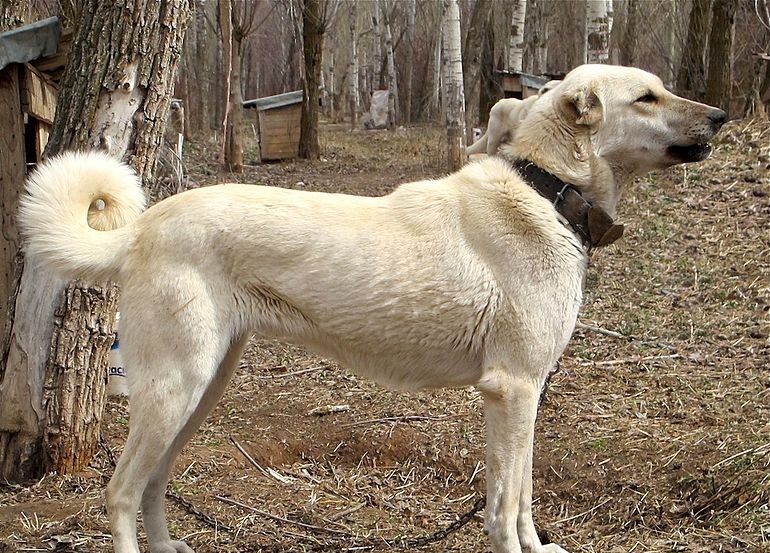 This purebred dog breed is from the Turkish region, Anatolia, known by several exciting names such as Akbash Coban kopegi, Akbash dog, and Coban kopegi.

Akbash is a Turkish word meaning white head. This name is given to this dog for its magnificent all-white coat which can be seen glistening from a mile.

This rare breed dog presents a wonderful combination of mastiff and gazehound characteristics. However, when it comes to appearance, you’d find mastiff features more dominating. For example, this muscular dog has a deep chest, a long tail, lean legs, and big, powerful jaws.

Asides from its eye-pleasing appearance, the most highlighted aspect of Akbash dogs are their incomparable guardian instincts. People of Anatolia used to adopt these canines solely as livestock guardian dogs since they are super loyal and protective towards their human and non-human families.

Their large, heavy stature, when mixed with their in-borne agility, speed, and alertness, make them the best watchdog, warning you about predatory intruders. However, unlike other large breeds, they prefer to be in low-energy dog sports. Similarly, they prefer the company of adults and grown-up kids who know how to handle them, gently.

Keep reading to figure out whether you should adopt this working breed as your family pet or not.

Bred originally as a guard dog, this lean, muscular, white dog makes a perfect choice as a show dog and family pet – especially for pet owners having a wide area to roam around and tight schedules.

Akbash dogs have independent nature with which they can think for themselves, when not being supervised. In this way, they can keep the invaders off your property, and with their fiercely independent temperament, they know how to face challenges and what to do in different circumstances.

The main reason why Akbash dogs are the very first choice of Anatolian shepherds is that they have all-white coats with which they blend superbly with sheep. In this way, you won’t confuse this flock dog with other dogs or wild animals and can spot it immediately.

As a home companion, Akbash can be highly affectionate and loves their human family more than anything. They won’t hesitate to jump onto your bed to have some good cuddle time. Another plus point is that the Akbash dog doesn’t bark or growl way too much. Instead, it’s quiet and calm most of the time.

Still, we can’t say that this dog breed is the easiest to deal with since Akbash dogs take a relatively long time to mature. You should not expect them to behave like a fully grown-up, property-protector canine until it’s three years old – Early training and socialization could make a difference, though.

The good thing is that they don’t develop separation anxiety quickly which means even first-time dog owners can adopt Akbash, without stressing over its mental health. The only thing you need to remember is that Akbash dogs like to be treated as your companion, not a subordinate.

Therefore, you better let them roam around your property freely, if you seriously want to avoid destructive behaviors. Speaking of their living conditions then Akbash is not well suited to apartment life. They are happier in rural and semi-rural settings.

Even though the mature Akbash canines don’t come with insane exercise needs, they still need at least a 1/4 acre yard to play and wander around. To put a pause on their curious nature and prevent them from escaping the property, you better install a 5ft tall fence around them.

History of the Akbash

No one knows the exact origin story of the Akbash canine but almost everyone agrees to the assumption that this breed was developed by ancient villagers of western Turkey, to protect their herds. Some reports suggest that Akbash ancestors date back to 750-300 B.C.

It’s believed that this large breed was bred about 3000 years ago and the motive behind this selective breeding was to produce a canine that can be clearly distinguished from other predators.

Over time, this dog breed got even better, performing their jobs as flock guardians more accurately than its Turkish counterpart. For example, they have sharp eyesight and acute hearing which keeps them highly aware of their surrounding.

Similarly, their heavy, tall, regal appearance and robust physique make them a tough competitor to wolves and other animals.

Due to the very same reason, Akbash is still used largely, not only by shepherds but also by security officials & rescue groups as service and assistance dogs.

Till 1960s, this landrace breed was confined to the western regions of Turkey. In 1978, Two Americans David & Judy Nelson introduced Akbash to the rest of the world. Nelson was so in love with this breed that he ended up importing dozens of Akbash dogs as foundation stock, to America, to increase the number.

Akbashbash was officially added to the guardian dog group by the American department of agriculture. Furthermore, in the same year, this department began using Akbash in its predator control program. In 1998, the United kennel club recognized this guardian breed but it’s still to be accepted by the American kennel club.

Speaking of their general appearance, the most distinguished feature of an Akbash dog is its wedge-shaped head, close-cropped, pendant ears, long legs, and slightly arched backs.

This dog breed is often described as one of the slimmest guardian breeds out there. Some other major physical aspects of Akbash dogs are as follows;

When it comes to size, the Akbash dog is standing at the larger end. This dog breed may grow up to a giant where the average height of males could be 33 inches. On the other hand, the females of this large dog breed might be 29 inches tall.

When fully grown up, the healthy weight range of these big dogs is 100-140lbs in the case of male Akbash. However, female Akbash is lighter in weight than males and may weigh around 80-12o lbs. Even an Akbash puppy could weigh 12-13 lbs when seven weeks old.

Akbash dogs might come with a long or medium coat but whatever the coat length is, the canines always tend to possess a double coat. Due to this, these dogs shed more frequently than other dog breeds and come with higher grooming needs.

When of medium length, the coat seems flat and sleek. However, the dogs with longer coats seem to have wavy fur, profuse feathering, and distinct ruff around the tail and legs. Due to having such a dense undercoat, Akbash can’t withstand extreme environments, especially in the summer.

All the Akbash pooches come with all-white coats, with no exception. However, some of them might come with slight hints of light biscuit or gray shading, in their undercoats or around their hanging ears.

The ultimate goal of an Akbash dog is to protect his whole family, including the pet family, from all the threats – including two-legged, four-legged, and legless ones. This loyal dog can trade his own life for your safety, making it an undoubtedly, excellent choice as a family dog and watchdog.

Despite having an imposing size, we can’t say that it could be good with your kids – when not fully grown up. Akbash pups can bite and even knock your kids out, without even acknowledging it so you better train them first, before introducing them to your kids.

Also, you should keep in your mind that Akbash dogs don’t unlock all of their mental capacities till they are 2-3 years old. Therefore, before they get aged enough, you better supervise their interaction with kids and other non-human members of your family.

Akbash puppies require more area to play and run around than adult Akbash canines, due to high activity levels. But since they are territorial animals, you can make them respect boundaries by installing sufficiently tall fences.

Unlike other dogs, it doesn’t crave too much attention. Instead, they like to spend some time alone, in their own space and solitude. If you have other pets in your family, you better raise your Akbash along with them so it won’t see them as an outsider or predators.

Behavior like nuisance barking and digging is what dull this amazing dog’s personality but you need to remember that there’s nothing proper training can’t fix.

Purebred Akbash dogs are generally healthy but some of them might develop severe health problems due to inappropriate diet and exercise. The most common health problems which an Akbash canine is prone to develop are hip dysplasia, gastric torsion, dilated cardiomyopathy, and hypothyroidism.

Almost all of these problems can be prevented by taking care of your canine’s diet and intake routine. For example, to discard the chances of obesity and hip dysplasia, make sure to get food, specialized for large breeds. Similarly, to prevent bloating, divide your dog’s daily food intake into two to three meals.

After every meal, make sure to take your Akbash to light play sessions or small walks. The daily exercise will keep him healthy, both physically and mentally. However, you should make sure not to take them out on strolls off-leash since they possess strong urges to wander off.

Speaking of their grooming requirement, there are not too many. Since their medium to long undercoats shed too much, consider weekly brushing mandatory. However, during humid or hot weather, you better brush their coats daily to prevent matting.

Since Akbash puppies grow up to an uncontrollable size real quick, you better start their training from the very first day. They are intelligent and can understand your commands after one to three training sessions.

However, for training, we won’t recommend going for negative reinforcement methods since they could trigger aggression and depression in your canine.

For example, when being trained for obedience and territory recognition, never opt for the underground fence. The shock or deterring elements could be disastrous to your pooch’s mental health.

Also, you should remember that you are going to train a pack leader. He’s not someone you can summon or train easily. It would take time to forge his independent mindset into a pet-owner relationship so be patient.

Many dog trainers have confirmed that reward-based training is the fastest way to make your Akbash behave desirably. A six-week-old Akbash can learn everything, even though his entire mental capabilities are still to be unlocked.

But still, an Akbash can observe and understand commands from such an early age so you better start to socialize with them.

Even though Akbash is a rare dog breed, you’d find plenty of them, waiting for the adoption, in rescue and foster homes. So, instead of spending $700-$900 on purchasing a pup, you should give the idea of adoption a thought.

Also, even though the puppies might seem fun to have around, they need way too much effort and attention to get trained for obedience and agility. On the other hand, when you adopt an adult dog, all you get is the best in terms of health, mannerism, and loyalty.

However, if you still want to purchase a brand new Akbash dog, you better find a reputable breeder and ask for the essential health certificates. Never fall prey to breeders who are interested only in unloading their batches of pups and looting your hard-earned money, by delivering unhealthy pups.