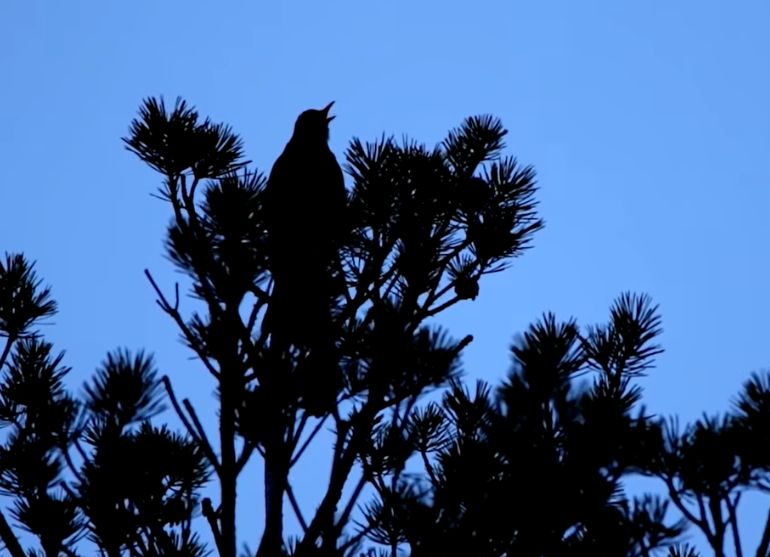 The birds chirping may sound pleasant to you in the wee hours during a beautiful sunrise. In contrast, the chirping sound all night long can be extremely annoying and disturbing, especially if you are a light sleeper.

It can be an interesting revelation for a few people, but the birds chirp at night. So we may suggest closing your window if your bedroom is right next to the lawn or garden.

Moreover, the birds chirping at night is not a vague concept; instead, it has a proper scientific definition and term. The nighttime birds’ chirping is called nocturnal vocalizations.

In this article, we will try to clear the air and find out the main reasons why birds chirp at night. So, you can understand this phenomenon better and get enlightened.

Why Do Birds Chirp at Night?

We all get irritated and curious as well when we hear birds chirping at night and wonder why birds do so. Generally, we believe that the barred owl is the only one among the night birds, and it rarely chirps.

However, there are some night birds other than barred owls, i.e., nocturnal birds and diurnal birds, that hoot and screech sounds or even sing melodiously.

Let us dig into the causes why birds chirp at night and get awareness about their language. Following are a few main reasons that will help you understand the night singing concept in a better way.

Usually, the male birds sing songs or chirp at night time to seek a mating partner. It is bird culture that the male tends to sing at night the most melodious and complex songs to attract mates, i.e., female partner.

The female birds are more inclined or attracted to the most soulful and pleasant bird sounds from a male bird. So, the males are competent enough to attract the females with their chirping.

Therefore, the night singing is at its peak during the spring season, as it is known as the breeding season for most birds. This process is common among all nocturnal birds and diurnal birds.

So if you have thick trees in your garden and experience male birds singing at night, you must embrace yourself for a whole lot family of birds soon.

The night chirps of birds can be a warning signal as they have a swift danger sensing ability.

Most of the time, when the birds shift their places, they feel fearful of the surroundings, which also results in high tone noise levels at night to stay alert or to seek help from fellow birds.

For instance, if they sense a predator approaching their nest or any unusual and loud noises around their dwelling area – that may trigger them to make noises or chirp loudly.

As the chirping works as a signal when in danger, it not only wakes birds but humans as well. So you can also go and provide help.

Moreover, once the chirping signal reaches fellow birds, they try and reach the nocturnal chirping birds, also, they chirp in response, which increases the intensity of the noise. It may also warn or make the predator step back as the collective singing of most birds may get aggressive at times.

The day birds are more prone to disorientation because they remain active during the daytime or dawn, so the light confusion makes them chirp at night as well.

The core reason for this disorientation is the light pollution which means there are more than the required lights. The urban areas contribute the most to this light pollution with skyscrapers, street lights, and artificial lighting.

The birds mistake it for the sunlight and consider it as daylight hours. Eventually, they start chirping or singing even at night.

Moreover, the noise during the daytime also makes the birds uncomfortable with all the traffic honks and loud noises. Eventually, when its night time, the birds find it more peaceful and convenient to chirp and sing away from artificial noises.

Thus, the night light and daytime noise pollution create confusion for the birds, leading to disorientation.

The birds mostly travel or migrate in groups of flocks. This migration occurs mostly at night time in the dark because the stars help them navigate the directions of their destination. The birds chirp during traveling to make the flight call.

Also, these flight calls are made from birds other than the group members who intend to join the migration flock. Therefore, it marks another reason why the birds chirp at night.

The chirping of migratory birds is very loud because they chirp in a group to stay connected and together.

Mostly, flying in unfamiliar areas, the birds tend to chirp more and louder to make sure every member of their group is safe and united.

Also, if any bird is somehow separated from the flock, it chirps so loud that it can be ear-splinting. In this way, it sings and sends signals to its group members to find it and re-unite with their flock.

As humans, the birds also get over-excited when they see food. The birds have to search hard to fetch some food.

Therefore, the birds react and make cherished noises when they find food. Also, the loud chirping after encountering feed can be due to multiple reasons.

For instance, the species may want to signal other flock members about the new food source. Or else they might be quarreling and fighting with other birds over the food. Hence, by all means, you will be hearing excessive chirping.

Another belief about birds chirping at night on feeding sight is that the male bird wants to show that it can provide enough food to its partner. So, they tend to attract more female birds in this way.

Additionally, they stimulate more energy while chirping to make room for the extra food. Thus, the more the food, the more the birds sing.

Another reason for the night chirping can be bird song practice. Although the birds naturally tend to produce pleasing and melodious sounds, they still try and practice more to get better at the bird calls.

Also, the birds singing or sound-producing skill is vital as they have to use them for communication with community members.

Most of the time, the birds imitate their parents’ songs or sounds to learn how to signal and communicate with other birds.

Also, they need to do the song practice because it will help them learn the signaling process for their survival.

Moreover, singing or birds chirping is vital for the nocturnal bird as it helps attract partners and grow the family. It also helps them claim the territories, seek help in danger, and communicate with other birds in their surrounding nests.

Baby birds are very much similar to human babies because both of them require intensive care and protection from their parents. The baby birds cannot survive on their own until a certain age, so they need constant supervision, protection, and a sense of the presence of their parents.

So, if they find themselves all alone in the nest, they start to chirp at their best to seek help and protection regardless of day or night. Also, they chirp or mimic their parents’ sounds to learn and practice the skill of birds singing and chirping.

Moreover, other needs like hunger, discomfort, or fear can also make the baby birds chirp even at night.

So, whenever the hatchlings are scared, alone, sick, or hungry, they chirp because the parent birds cannot always be with them as they have to fetch feed as well.

Hence, if you are hearing birds sharp and loud chirping at night time, rest assured that it is some hatchling scared of being alone or hungry.

Hearing birds chirping is a soothing and pleasant sound in the early mornings with fresh air from the windows and topped up with bird sightings. Thus, it can be a regular practice or hobby for most people to enjoy their leisure time.

However, the experience of hearing birds chirping can be the opposite if this happens at night.

The nighttime is usually for resting for all living organisms. Humans want to have a peaceful and sound sleep at night after a tiresome day.

However, the birds may hinder the plan when they chirp at night. This practice is usually at its peak during the spring season as it is the breeding season for the birds.

The male specie seeks female partners through chirping and singing. Also, the birds use chirping as a signal for other birds in times of danger.

The bird species use this skill to communicate with each other, claim their territory, and announce the presence of food.

The birds use chirping as flight calls when traveling during the migration season, which is once or twice a year-round.

They use it to stay united and connected in case of separation to find each other. They migrate during the night to seek navigation help from the stars.

Also, they chirp for the singing practice to better their bird call. Hence, nighttime chirping is not a useless practice it is purposeful for the nocturnal birds and diurnal species.