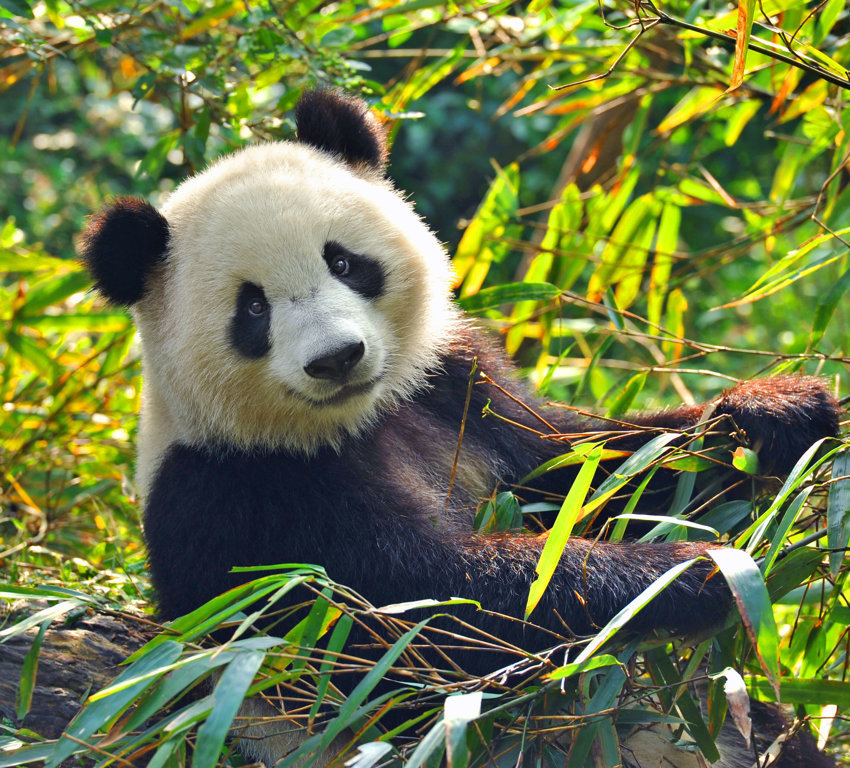 Like most endangered creatures, the giant panda has had to bear the brunt of man's frantic quest for development. No place embodies this phenomena more starkly than China, of which this furry animal is a native. The panda population in the plains of China have completely vanished over the millennia, and the only giant pandas remaining are those found in the Qinling Mountains of the Sichuan, Shaanxi and Gansu provinces of Central China. These rain-soaked forests are at elevations from 5,000 to 8,000 feet and are generally covered in clouds and mist.

An adult male panda can weigh over 350 lbs, the female 275 lbs, and measure from 2 to 3 feet in height up to its shoulders. With its huge round white-colored body, two black patches around the eyes, black ears and stout black legs, the panda looks very much like an over-bloated raccoon.

The breeding age of the pandas starts from about 4 to 8 years and remains reproductive up to the age of 20. The female gives birth between 95 to 150 days, and the panda cub is probably one of the most difficult creatures to raise. Almost blind, hairless and pink, the baby is 1/900th the size of its mother. The cubs remain without eyesight for a period of six to eight weeks and are just able to move around after three months.

Bird meat, rodents, carrion and grass form a part of the animal's diet, but these are secondary. Their primary diet is bamboo, which is available in plenty in the Qinling Mountains. The panda's huge round face is suggestive of a powerful set of jaws which itself is an adaption to a coarse diet such as the bamboo. The flowers of the bamboo have more nutrition than the stems. Re-flowering of the bamboos is a slow natural process and there is a fragile balance between it and the slow reproductive rate of the pandas – something that has evolved over a million years in these mountains.

Changes in climate threatens to upset this delicate balance. It presents a genuine threat to the habitat of the panda. A 3 to 4 degree rise in temperatures could easily wipe out half the bamboo forests and leave the panda starving. Scientists opine that owing to the serious damage to the ozone layer, a fallout of China's manic industrialization drive, temperatures could rise up to such a point that there would be none of these precious bamboo forests left after 50 to 100 years. While bamboo could be cultivated in other areas, it would have none of the nutritional value of the Qinling mountain bamboo. There's still plenty of bamboo being cultivated in China, but for the panda to move out of its habitat in search of its vital food will put it in direct confrontation with humans.

Poaching is another menace, and pandas have been captured over the years for exhibition in private zoos. Their pelts fetch a high price in the illegal wildlife trade. Giant pandas sometimes end up in traps laid for other animals and receive grievous injuries. The Chinese government has put in place strict penalties for panda poaching that entails a ten-year sentence and confiscation of property.

Authorities in the Shaanxi Province enacted a regional law in 2007 that marked the Qinling Mountains as a protected zone. The law also states that all development projects in the vicinity of the zone will be assessed for their impact on the ecology and bio-diversity of the region. The Natural Forest Protection Project, implemented by the Chinese Government, has gone a long way in securing a future for the pandas.

Despite these efforts, China has been criticized for showing little interest in true conservation. The Chinese government rents pandas to zoos around the world. Few pandas have been born in zoos, and only a handful of those have been released into the wild; the majority of which did not survive. The enormous amount of money spent on panda breeding programs has been criticized, as the money could be used much more effectively by saving wild habitats.

Zoo pandas suffer the same stresses all wild animals face in captivity. They are moved from zoo to zoo, usually more for political and economic reasons rather than genetic management. Their natural habitat can never be truly simulated, leading to changes in behavior, prolonged inactivity, health problems, stereotypical behavior and lower levels of immunity creating higher susceptibility to illness and disease.

Animal advocates argue that the pandas' welfare should be put above propaganda and profits; pandas should be put in refuges out of the public eye to eliminate the stress they endure due to such exposure.

Wildlife organizations have had an impact by establishing panda natural reserves and conservation programs. Integrating reserves with forest farms and bamboo corridors enable pandas to forage for more food and come into contact with new breeding mates.

A 17 percent rise in the panda population has been witnessed in the past decade. From a count of 1,596 individuals in 2003, it has risen to 1,864. Of these, though, 50 pandas are condemned to captivity in 18 zoos spanning 13 countries.