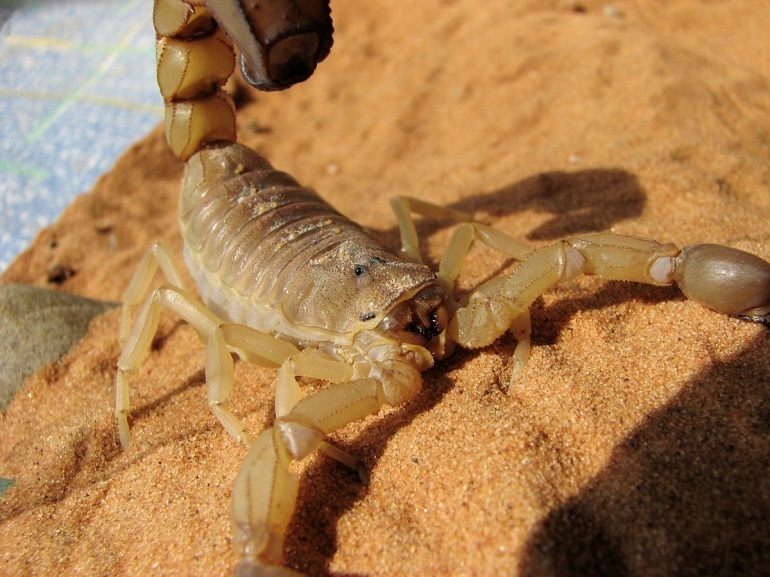 Scorpio (order Scorpiones or Scorpionida) is approximately 1,500 species of long arachnids with curved and segmented venomous stingers on the back of the body and a pair of grasping pincers on the front. The pedipalps and legs are composed of seven segments (from the body outward: coxa, trochanter, femur, patella, tibia, basitarsus, and tarsus).

These are arachnids of the order Scorpions. They are characterized by a pair of grasping claws and a narrow, segmented tail, often carried in a characteristic forward curve over the back, and are sometimes called “tail stinger.” They are found widely distributed throughout the world, especially in tropical regions.

They are predatory arthropod animals of the order scorpions within the class Arachnida. They are found on all continents except Antarctica.

Their size varies widely, ranging from 2 to 22 cm (0.8 to 8.7 in). The majority of scorpion families are obscure and unimportant to human beings. The black emperor scorpion (Pandinus imperator), an African species found in Guinea, is one of the giant scorpions and can grow to be around 18 cm (7 inches) long and 60 grams in weight.

The rock scorpion is known as the longest scorpion in the world. They possess a venomous sting, which they use primarily to kill or immobilize prey. However, the sting may also be used for self-defense.

The vast majority of scorpions are solitary, anti-social creatures that only engage with one another during cannibalism, courting, or birth. They are frequently so hostile that people commonly refer to them as “inveterate cannibals.” However, some show social interactions.

They primarily eat insects and other arthropods, using their chelicerae to crush the exoskeleton of their prey. However, many members of the family Buthidae, which includes thick-tailed scorpions, actively look for prey. They are opportunistic feeders and will consume a wide variety of food items, including other scorpions.

They are smart vultures that devour any small animal they can capture. Common prey includes bugs as well as spiders and other arachnids, which include different scorpions. They are relatively long-lived for invertebrates, with some species living up to 25 years in captivity.

The Australian spiral burrow, or spider-hunting scorpion (Isometroides viscus), which only eats burrowing spiders, is the only known specialist scorpion. Other arthropods, such as termites, wasps, and centipedes, have the potential to assault these. The main predators are mammals, birds, lizards, snakes, frogs, and reptiles.

Meerkats are somewhat skilled at catching and eating this creature because they can avoid being harmed by the venom by biting off their stingers. This creature has unusual feeding habits.

Scorpions are found in a wide range of habitats, including deserts, grasslands, rainforests, and savannas. Scorpions are also found in more temperate areas such as forests, steppes, and caves. They prefer to live in areas with a warm climate and little rainfall. They are found on all continents except Antarctica.

They are most diverse in the tropics. Several degrees above the temperatures that would be fatal for other desert arthropods, desert scorpions can endure temperatures of 47 °C (117 °F). Most species in deserts and other dry areas are yellow or light brown in color.

Moreover, it is found in wet or mountainous habitats, and you will find it in brown or black shades. Many species can get densities on the local level as of one or more individuals per square meter. In some desert areas, the biomass of scorpions exceeds that of all other animals except termites and ants.

During the day, they hide from the sun in cool, dark places such as crevices or burrows. They are usually found in areas with a warm climate and little rainfall. They are most diverse in the tropics, though a few species also occur in temperate regions. Other species show adaptability to habitat use.

On the other hand, the European Carpathians live on the mainland, as well as in caves and intertidal areas. Similarly, cave-related scorpions of South America can also be quoted as a good example. From sea level in Israel to more than 3,000 meters (9,900 feet) in the Atlas Mountains of Africa, thousands of kilometers to the west, the Scorpio Maurus can be found.

Some species have particular habitat needs. For instance, sand-dwelling (psammophilic) has structures that both allow for adaptation and limit their ability to live elsewhere.

Scorpions reproduce sexually, with males and females coming together to mate. They are viviparous, meaning that the female retains the eggs inside her body until they hatch. Once the young Scorpions hatch, they climb onto the back of their mother and are carried around until their first molt. They molt an average of five times (the range is four to nine) before reaching maturity.

Moreover, they undergo several molts during their lifetime. They generally reach sexual maturity after their final phase. Reproduction is a seasonal activity that typically takes place in the hot months of late spring through early fall. To find receptive females, males will often travel hundreds of meters.

The pheromone that females release from the end of their abdomens is thought to be how males locate females. After mating, males who stick around the females are occasionally killed and eaten. The mother devotes a lot of time and effort to raising her children.

The majority of non-mammalian creatures lay eggs, however, scorpions are warm-blooded, giving birth to live young. The embryos are fed in utero for some time ranging from several months to a year after the eggs have been fertilized. The eggs are then retained in the female’s body. The actual birthing process could take anywhere from several hours to a few days. While tropical species give birth year-round and typically give birth in the spring and summer.

Scorpions are generally solitary creatures, though some species live in groups. They typically live under rocks or in burrows, though some of these live in trees. These are nocturnal creatures and are most active at night. During the day, they hide from the sun in cool, dark places such as crevices or burrows.

They are usually found in areas with a warm climate and little rainfall. They use their stingers for both hunting and defense. They mainly hunt at night, crushing their predator’s orthosis with their chelicerae. Even some of these have a seasonal preference for scorpions.

Some of these feed on other species and devour one another, making them their own worst enemies. Predation like this can be a significant cause of death and may restrict the quantity and range of some species.

Most of these find meals by scavenging, though some species are predators and actively hunt for meals. They use their stingers for both hunting and defense. They typically hunt at night, using their chelicerae to crush the exoskeleton of their prey.

They possess a venomous sting, which they use primarily to kill or immobilize prey. However, the sting may also be used for self-defense. They are relatively long-lived for invertebrates, with some of these living up to 25 years in captivity. Some of these, such as the emperor scorpion, are kept as pets.

Even roaches have been frozen by researchers, who then placed them in the sun the next day to watch them thaw out and move on. But there is one thing that scorpions struggle to survive; without soil. As burrowing creatures, scorpions may not be able to thrive in places of permafrost or dense grasses where there is a lack of loose soil.

Scorpions are not typically aggressive towards humans and will only sting if they feel threatened. However, some of these are more venomous than others and their stings can be potentially dangerous. They are also used in traditional Chinese medicine. People in West Africa, Myanmar, and East Asia eat this wild animal. There, crabs can be cooked and consumed in a variety of ways, for example, baked, fried, grilled, fresh, or even while still alive.

Since persistent and direct heat negates the negative effects of the venom, the stingers are normally left in place. While crabs are not as frequently consumed in Thailand as other arthropods like grasshoppers, they are frequently fried and served as street food. In Vietnam, they are employed to create snake wine (scorpion wine).