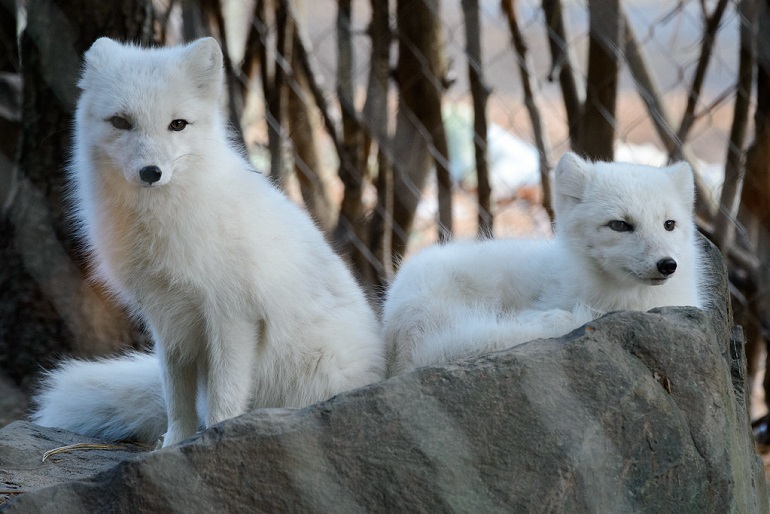 The Arctic fox (Vulpes Lagopus), or Alopex Lagopus, also known as the white fox, polar fox, or snow fox, is a small fox native to the Arctic regions of the Northern Hemisphere and common throughout the Arctic tundra biome. It is well adapted to living in cold environments and has thick fur that warms its body.
The Arctic fox lives in some of the most frigid extremes on the planet. Its diet consists mostly of lemmings, voles, Arctic hares, birds, and carrion. Nevertheless, it can hunt successfully in complete darkness using its keen hearing and sense of smell.

While members of the blue phase (blue foxes used in the fur trade) are light grey in summer and gray-blue in winter, those of the white phase are greyish brown in summer and white in the latter. It has a white coat of fur that helps it blend in with its snowy surroundings and a thick coat that keeps it warm in cold climates. In addition, they are proficient hunters, able to find edibles in complete darkness using their keen sense of hearing and smell.

Arctic foxes are small canids that are native to the Arctic regions of the Northern Hemisphere. They have a white coat of fur that helps them blend in with their snowy surroundings and a thick coat that keeps them warm in cold climates. In addition, the Arctic fox is a proficient hunter, able to find food in complete darkness using its keen sense of hearing and smell.

Arctic foxes live in some of the most frigid extremes on the planet. As a result, the Arctic fox has a plump body shape and short muzzle, with distinctive white coats covering most of their bodies.

In 2018, a juvenile female arctic fox traveled more than 3,500 kilometers from her den in Spitsbergen, Norway, to Ellesmere Island in northern Nunavut, Canada. She did this by traversing sea ice and the vast, desolate expanses of the frozen Arctic.

During this epic solo adventure, the young fox traveled as much as 155 kilometers in a single day, which he completed in just 76 days. This is the quickest moving pace ever noted for this species. Sadly, her fate is still unknown, but the monitoring information has helped scientists comprehend how crucial ocean ice is to arctic fox migration for food and new territory.

The Arctic fox is well adapted to living in cold environments. The Arctic fox has a thick coat of fur that keeps it warm, and it can hunt successfully in complete darkness using its keen sense of hearing and smell. In addition, the Arctic fox is a successful predator with few natural predators. Being a burrow dweller, the Arctic fox can be active at any time of day. It consumes any accessible animal or plant matter, and frequently they follow polar bears to consume the leftovers of their hunts.

It primarily preys on rodents like lemmings during the summer, though it may sometimes take birds. Along with hunting rodents, the Arctic fox also hunts birds in the winter, including ptarmigan, grouse, small mammals, and puffins. The Arctic fox is vulnerable to human hunting and larger animals like the polar bear, wolf, and wolverine.

The adaptive and larger red fox, whose habitat has been expanding northward over several decades due to climate transition, has been gaining ground on this little fox species. The arctic fox range has reacted by shifting north in certain locations in search of food, shelter, and space.

The Arctic fox is classified as Least Concern by the IUCN Red List. However, its Conservation Status is Vulnerable in Canada due to declining populations. The main threat to the Arctic fox is habitat loss due to climate transition causing reductions in sea ice cover. Humans also hunt them for their fur. We are aware that the world is transforming. One of the biggest and most difficult environmental problems that the world is currently confronting might have devastating effects in the future on the economy, the environment, and society. We are aware of the cause and have solutions to stop this. With your help, we can protect your world by battling climate change and global warming.

Arctic fox lives in some of the most frigid extremes on the planet. The Arctic fox has a plump body shape and short muzzle, with a distinctive white coat covering most of their bodies. The diet consists mostly of lemmings, voles, Arctic hares, birds, and carrion.

The Arctic fox is one of the few land mammals that live year-round in the Arctic. Despite these adaptations, the Arctic fox is still impacted by habitat loss due to climate change. As sea ice cover decreases, Arctic fox is forced to travel further distances to find food, which puts them at risk of starvation or predation. The Arctic and alpine tundra of the polar region in the Northern Quarter are among the icy-cold habitats where the Arctic fox thrives. In addition to being smaller, sturdier, and more compact than other Fox family members, the Arctic fox has a lower total body surface area, which helps to retain heat.

To help an animal stay warm at the core and endure the icy conditions of the Arctic, the thickness of the coat also grows during the winter. Therefore, Arctic fox doesn’t need to hibernate since they have the physical adaptations to withstand the winter. Nearly three times as quickly as the rest of the world, the Arctic is warming. And all of these polar changes—permafrost thawing, ocean ice melting, less snow cover, and global sea level rise—are connected to this.

Arctic foxes mate for life and usually stay together until one dies. Litters usually consist of five to ten kits born blind and deaf and remain in the den for several weeks before emerging. Despite being well-adapted to living in cold environments, they are still impacted by habitat loss due to climate change. Therefore, conservation efforts are necessary to protect this species from further decline. Like a cat’s, this fox’s broad tail helps it maintain balance. Including the 30-cm (12-inch) tail, fully mature individuals measure around 50-60 cm (20-24 inches) in length and weigh between 3 and 8 kilograms (6.6–17 pounds).

It typically reproduces once a year, giving birth to a litter of up to 20 dark-furred pups between April and June after a gestation period of roughly 52 days. At around 45 days after birth, the pups are weaned and starting in September or October of the same, and they leave the den to live independently. At the age of 9–10 months, children reach sexual maturity. In zoos, they can live up to 10 years; in the wild, they only typically live for approximately three years.

Arctic foxes are solitary animals and do not generally form packs like many social canids. However, Arctic foxes have been known to scavenge in groups when food is abundant. They typically live in dens that they dig themselves or use the dens of other animals, such as Arctic hares and ground squirrels. Arctic foxes mate for life and usually stay together until one dies.

Our goal in writing this essay was to help you learn more about arctic foxes. Continue reading our post for more fascinating information.