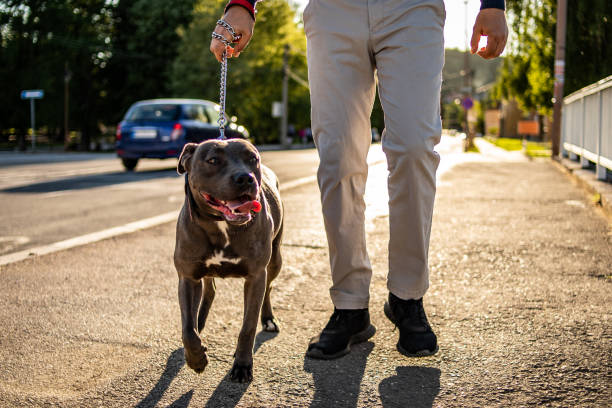 Popular by several names like AmStaff and American staff, the American Staffordshire terrier is a muscular dog recognized by its medium-large size, short coat, and close resemblance with the American pit bull terrier.

The dog falls in the category of American terriers, and their services are believed to be used for hunting rodents. Despite being the descendants of fighting dogs, modern-day Staffordshire terriers are considered domestic dogs due to their untradeable loyalty, intelligence, and human-friendly nature.

Whether you want good-natured companions to accompany you on adventures or looking for an affectionate, patient canine to share your bed, an American Staffordshire terrier will never say NO, when it is a matter of your happiness.

And do you know that an American Staffordshire terrier named Stubby also participated in the First World War and eventually got promoted to the rank of Sargent?

This fact is enough to show how trainable and intelligent this dog breed is. However, these dogs don’t have a very good reputation among dog owners due to a controversial background. Not only this but Staffordshire terriers have often been added to breed-specific legislation programs.

Such programs work for limiting the dog population, considering their aggressive and harmful temperament towards humans and other animals. In addition to this, their strong jaws, powerful heads, and proactive bodies can make anyone think about whether such a dog should be kept in a house – let alone around children.

Thus, to provide you with better, well-researched information, here we’ve penned down all the details about this dog breed. So just dive in and find out whether an American Staffordshire terrier can prove your trustworthy friend down the road or not.

About two centuries ago, terriers and Pit bulls were used in blood sports like bear baiting and bull baiting. Such inhumane dog sports tournaments were held in England, and people used to enjoy them a lot.

After 1835, both these inhuman dog fighting were outlawed (especially those which involve conducting matches between a dog and a bear or bull).

However, special sorts of dog fighting tournaments were still conducted in which dogs were made to fight other dogs. Thus, to improve their fighting skills, breeders began to breed bulldogs with other fighting dogs, including terriers.

This cross-breeding aimed to develop a breed that could outperform all the other breeds in the ring. At the same time, breeders wanted that dog to be human-friendly since it was against the rules of the tournament for a dog to bite any human.

Considering its extraordinary hunting abilities, British farmers also began employing these fighting dogs to hunt rodents in their farms and to protect their livestock from predators.

After the American civil war, many miserable British people migrated to America, in the hope of a better future. Those immigrants also took these Staffordshire bull terriers along with them, and this way, this dog breed was introduced to the States.

After this, the American breeders began modifying this breed even further. They actually wanted to produce larger Staffordshire terriers with cooler temperaments and friendlier nature.

Although both the British and American pit bull terriers were quite different from each other (in terms of weight, size, and temperament), they were considered the same breed till 1935. Finally, the American kennel club officially recognized these two breeds as separate breeds.

According to the breed standards set by the American kennel club, an American Staffordshire terrier should pack exceptional strength for his size, and exhibit a muscular, smart, graceful, and more put-together personality.

His legs should not be too long or too short but of medium size with a stocky appearance. On the other hand, his skull should be broad with a high-standing medium-sized head and powerful jaws.

Speaking of the facial features, they should have prominent cheekbones, a black nose, high-setted ears (either cropped or uncropped), dark, round eyes, and an overall happy expression.

When trained and socialized properly, this dog should be calm, confident, and alive to the people and environment around him. Since these dogs are smart, they should be highly trainable and always up for mental and physical challenges. Lastly, the average life expectancy of an American Staffordshire terrier is 12-16 years.

In addition to the above-stated description, here are a few more points, about this dog’s appearance that you should know about!

As mentioned before, the size of male and female Staffordshire terriers may vary. Generally, the male terrier might grow 18-19 inches tall whereas a female terrier may grow up to 17-18 inches.

However, the dog might be subjected to abnormal conditions of becoming underweight and overweight, after not getting proper diet and exercise.

The American Staffordshire terrier features a short and stiff coat that looks glossy. Throughout its length, the coat is flat, with no wiry or curled strands.

American Staffordshire terriers come in a variety of colors (both solid colors and combinations). These colors include black, brindle, white, fawn, blue, sable, and brown.

Speaking of the color combinations, black-and-tan is acceptable; however, any dog containing more than 80% of the white coat is not accepted by the AKC breed standards.

American Staffordshire terriers fall in the middle of couch potatoes and super energetic dogs. They are not the ones who lay lazily beside you, on your couch. However, they are also not the ones who want to play at midnight.

During the day, they’ll be energetic, playful, and fun to be around; however, as the sun sets, these canines will happily curl up on your couch and get ready for cozy cuddles. However, American Staffordshire terriers are also very conscious about their needs, whether it’s physical or emotional.

To vent their anxiety, these dogs will start chewing whatever they find and won’t even hesitate to dig under the fence. However, these American Staffordshire terriers are not suitable for households having smaller pets.

Since their ancestors have long been used to hunt rodents and other small predators, the modern-day American Staffordshire terrier also can’t fight the temptations to catch and hunt smaller animals.

Similarly, due to packing in high energy in their bodies, an American terrier stays happier in country-style living conditions. However, since the hustle and bustle of city life don’t irritate them, they will be fine when living in a house with a wide yard too.

Since they’re people pleasers, they won’t drag you to play dog sports and enjoy whatever you are doing. The best part here is that American Staffordshire terrier can also be trusted around kids, as they won’t bite or knock your kids out, during a fight.

Still, it’s better to supervise the interaction the whole time since their medium-large size might be way too big for your toddler to handle.

Considering their over-friendliness with strangers, we can’t say that an American Staffordshire bullterrier will be a good option as a guard dog.

However, some owners have confirmed that these dogs require a considerable amount of time to decide whether a person should be kept on the friend list or not.

After observing strange or problematic behaviors, the American pitbull terrier barks endlessly to warn you about possible danger. This trait makes them good watchdogs.

Excessive barking is not a problem you’d have to face with an American Staffordshire. They only bark out of their protective instincts or boredom.

Although this breed is quite friendly towards other humans, its strong fighting dog instincts might make it aggressive towards other dogs. However, if you’ve another dog in your house, make sure to raise your American Staffordshire along with that dog.

Doing so will not only make them familiar with your house pets but also give them a chance to socialize with other animals while staying at home.

American Staffordshire is generally a healthy breed that doesn’t develop severe syndromes throughout their lives. Still, some hereditary health issues might pass on to them, such as follows;

This problem affects mobility as the hip and thigh joints begin to degenerate and deform over time. Thankfully, this condition can be cured with the help of physiotherapy and surgery.

Since it’s mostly passed on by the parents, don’t forget to check for the genetic test results, before buying a new pup.

This syndrome affects so many systems of the canine’s body, including its digestive system, reproductive system, immune system, and even circulatory system. Resultantly, your dog begins getting closer to their sad end, day by day.

Like all the other dogs with short coats, the American Staffordshire terrier is also prone to catching skin allergies and infections. These skin disorders are often caused by environmental agents and poor hygiene conditions.

To prevent these painful allergies, make sure the coat of your American Staffordshire is in its neatest form, all the time. Luckily, it’s super easy to maintain since all you need to do is to brush it, once a week, to remove loose, dead hair and debris.

Since the coat doesn’t give out a bad odor, there’s no need to give your Amstaff baths frequently. However, these dogs tend to develop bad breath too quickly therefore, it’s important to brush their teeth twice a week for sure.

Whether your American Stuffy has cropped or uncropped ears, clean them every week to remove dirt and debris. Otherwise, they might develop painful ear infections.

To vent their energies, American Staffordshire must be allowed to undergo a 1-hour long play session daily. During this, you may make your dog participate in any sort of physical activity since Amstaffs aren’t afraid of challenges.

They enjoy fetching, jogging, walks, nosediving, and almost all other activities. Bring some interacting toys for your Amstaff to provide them with sufficient mental stimulation.

Lastly, since American pit bull terriers are naturally curious, it’s important to fence your property so they won’t wander off or attack a passerby when feeling threatened by them.

Considering all these personality aspects of American Staffordshire terriers, we’d recommend them to experienced dog owners – those who know how to handle an enthusiastic and high-energy dog.

Since they are quite attentive towards their owners, they are super easy to train. Just stay consistent with the reward-based training & early socialization strategy, and your AmStaff will become a good boy, in just a few days.