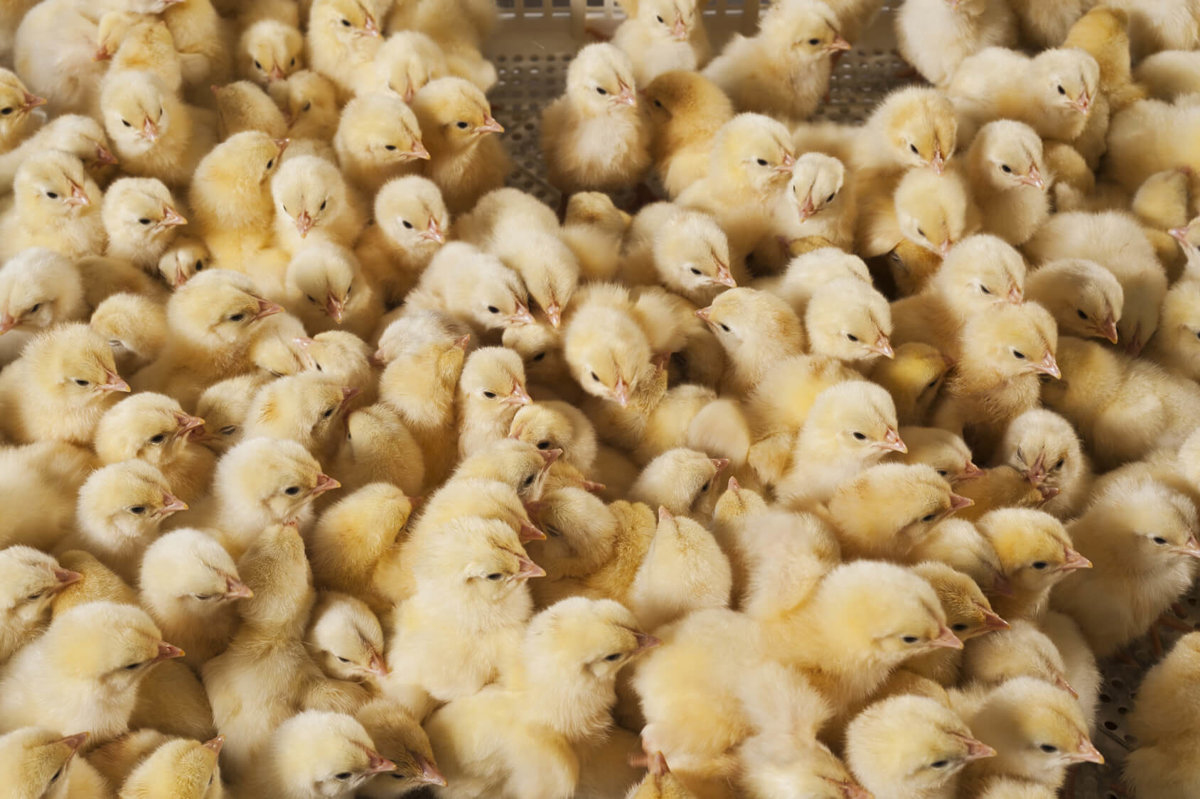 Life on "Old MacDonald's Farm" isn't what it used to be. The green pastures and idyllic barnyard scenes portrayed in children's books are quickly being replaced by windowless metal sheds, wire cages, "iron maidens," and other confinement systems integral to what is now known as "factory farming."

Simply put, the factory farming system of modern agriculture strives to produce the most meat, milk, and eggs as quickly and cheaply as possible, and in the smallest amount of space possible. Cows, calves, pigs, chickens, turkeys, ducks, geese, rabbits, and other animals are kept in small cages or stalls, often unable to turn around. They are deprived of exercise so that all of their bodies' energy goes toward producing flesh, eggs, or milk for human consumption. They are fed growth hormones to fatten them faster and are genetically altered to grow larger or to produce more milk or eggs than nature originally intended.

Because crowding creates a prime atmosphere for disease, animals on factory farms are fed and sprayed with huge amounts of pesticides and antibiotics, which remain in their bodies and are passed on to the people who eat them, creating serious human health hazards.

Chickens are divided into two groups: layers and broilers. Five to six laying hens are kept in a 14-inch-square mesh cage, and cages are often stacked in many tiers. Conveyor belts bring in food and water and carry away eggs and excrement.

Because the hens are severely crowded, they are kept in semi-darkness and their beaks are cut off with hot irons (without anesthetics) to keep them from pecking each other to death. The wire mesh of the cages rubs their feathers off, chafes their skin, and cripples their feet.

Approximately 20 percent of the hens raised under these conditions die of stress or disease. At the age of one to two years, their overworked bodies decline in egg production and they are slaughtered (chickens would normally live 15-20 years). Ninety percent of all commercially sold eggs come from chickens raised on factory farms.

More than six billion "broiler" chickens are raised in sheds each year. Lighting is manipulated to keep the birds eating as often as possible, and they are killed after only nine weeks. Despite the heavy use of pesticides and antibiotics, up to 60 percent of chickens sold at the supermarket are infected with live salmonella bacteria.

Cattle raised for beef are usually born in one state, fattened in another, and slaughtered in yet another. They are fed an unnatural diet of high-bulk grains and other "fillers" (including sawdust) until they weigh 1,000 pounds. They are castrated, de-horned, and branded without anesthetics. During transportation, cattle are crowded into metal trucks where they suffer from fear, injury, temperature extremes, and lack of food, water, and veterinary care.

Calves raised for veal--the male offspring of dairy cows--are the most cruelly confined and deprived animals on factory farms. Taken from their mothers only a few days after birth, they are chained in stalls only 22 inches wide with slatted floors that cause severe leg and joint pain. Since their mothers' milk is usurped for human consumption, they are fed a milk substitute laced with hormones but deprived of iron: anemia keeps their flesh pale and tender but makes the calves very weak. When they are slaughtered at the age of about 16 weeks, they are often too sick or crippled to walk. One out of every 10 calves dies in confinement.

Ninety percent of all pigs are closely confined at some point in their lives, and 70 percent are kept constantly confined. Sows are kept pregnant or nursing constantly and are squeezed into narrow metal "iron maiden" stalls, unable to turn around. Although pigs are naturally peaceful and social animals, they resort to cannibalism and tailbiting when packed into crowded pens and develop neurotic behaviors when kept isolated and confined. Pork producers lose $187 million a year due to dysentery, cholera, trichinosis, and other diseases fostered by factory farming. Approximately 30 percent of all pork products are contaminated with toxoplasmosis.

Factory farming is an extremely cruel method of raising animals, but its profitability makes it popular. Farm animals are sentient beings that experience all the same emotions we do. The best way to save animals from the misery of factory farming is to stop or reduce your consumption of meat, milk, cheese and eggs.