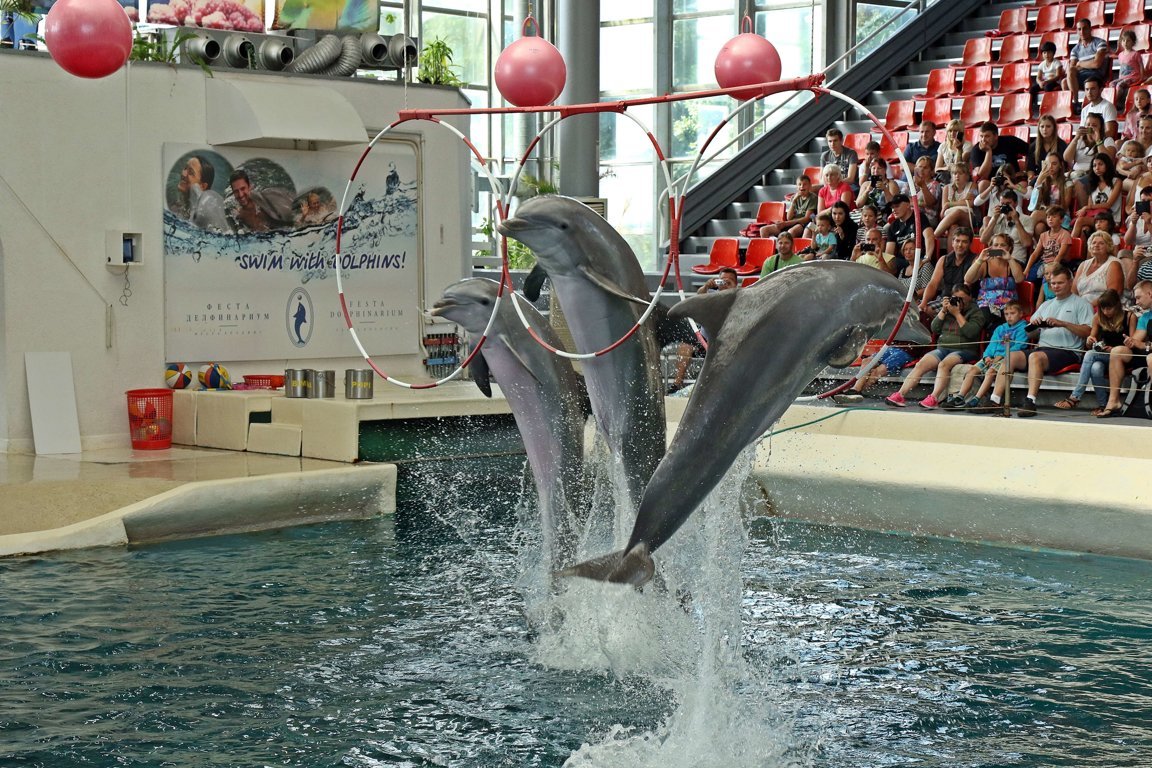 Both orcas (commonly known as killer whales) and dolphins are members of the dolphin family Delphinidae -- orcas are the largest members. More than 500 orcas, dolphins and other members of the dolphin family are held in captivity in the United States. Before the Marine Mammal Protection Act (MMPA) was passed in 1972, some 1,133 dolphins were captured in U.S. waters. Since 1961, 134 orcas have been captured worldwide for aquariums; of those only 28 are still alive, when a normal lifespan in the wild is 50 years. While the MMPA made it more difficult to capture marine mammals from the wild, aquariums can still apply for permits or import animals caught in other countries. Whether wild caught or captive born, orcas and dolphins in captivity are sentenced to a life of confinement deprived of normal social and environmental interaction.

The following are some of the myths surrounding captive marine mammals.

MYTH: The needs of orcas and dolphins are met in captivity.

Orcas and dolphins are extremely social, intelligent, and active animals. In the wild they are perpetually mentally and physically challenged by their life in the ocean and are almost always on the move. Orcas and dolphins in aquariums do not have a constantly changing aquatic environment to challenge them and their small tanks are comparable in size to human prison cells.

In the wild, dolphin populations are comprised of females and calves. Adult and sub-adult male dolphins form separate groups and form strong bonds in pairs or trios lasting up to ten years. Orcas live in maternal groups or pods consisting of family members including related adult males. No orca has yet been seen to transfer permanently from one pod to another. Studies of acoustical recordings show that each pod retains a unique dialect of vocalizations used in communication. Even after decades in captivity, orcas continue to produce the sounds of their natal pod.

In captivity these social organizations are restricted or nonexistent, as family members are traded and sold to other aquariums. In some cases calves have been removed from their mothers when they were only 6 months of age. When calves are separated from their mothers, it ensures that the normal social structure will never be developed.

Current research shows that there is no significant difference between the longevity of captive orcas and dolphins and wild orcas and dolphins. Despite the controlled environment, routine veterinary care and medications including anti-depressants, captive dolphins and orcas do not outlive their wild counterparts.

Looking at the bigger picture, the insistence on relying on mortality as a barometer of health of species is a distraction, taking attention away from the real issue of quality of life for the unfortunate animals who are forced to live in small barren enclosures for their entire lives.

The marine mammals most commonly bred in captivity are not threatened or endangered species, so continued breeding in captivity exists to produce the next generation of park entertainers and to ensure continued profits. Aquariums have no intention of returning captive-bred animals to the wild. In fact, they claim that the success of such an endeavor would be unlikely and vehemently oppose release efforts.

Real conservation efforts focus on protecting habitat and the animals' place in that habitat.

Much of the research done at marine parks focuses around reproduction and maintaining the health of captive animals to ensure the perpetuation of profits for the industry. Results of studies conducted in captivity may not be adequately extrapolated to wild animals for several reasons:

Captive marine mammals live in small, sterile enclosures and are deprived of their natural activity level, social groups, and interactions with their natural environment.

Many captive marine mammals develop stereotypic behavior and/or aggression not known to occur in the wild.

What we have learned from captive research is that orcas and dolphins are more intelligent than previously imagined, providing more evidence that a life in captivity is inhumane.

The principal education component at these parks comes from the "shows" where the animals perform tricks and stunts much like circus clowns. The education offered is often inaccurate, incomplete and misleading. Marine mammals cannot behave normally in a situation that deprives them of their natural habitat and social structure. Patrons witness and learn about abnormal animal behavior. The real message conveyed is not one of respect, but rather that it's all right to abuse nature.

In a current national survey, almost all respondents indicated captive marine mammals should be kept under the most natural conditions possible, even if it meant the animals were more difficult to observe. Three-quarters of the American public further expressed a preference for marine mammals displaying natural behaviors rather than perform "tricks and stunts." Four-fifths of the national sample believed zoos and aquariums should not be permitted to display marine mammals unless major educational and/or scientific benefits resulted. Three-fifths objected to capturing wild dolphins and whales for display in zoos and aquariums. Three-quarters disapproved of keeping whales and dolphins in captivity if it resulted in significantly shortened lifespans.

A tremendous amount of money and public support was raised around the efforts to rehabilitate and release Keiko, the star of the movie Free Willy. This would not have been possible if people believed that aquariums were the right place for orcas.

Do not patronize any form of entertainment that uses animals. Tell your friends and family to boycott all aquariums that hold captive marine mammals for entertainment. Support only those aquariums involved solely in the rehabilitation and release of marine mammals, or the care of animals that cannot be released.

Support legislation to protect captive and wild marine mammals. If you witness a wild marine mammal being harassed or poached, contact the National Marine Fisheries Service. The national toll-free phone number for the enforcement division is 1-800-853-1964.

If you witness a captive marine mammal being neglected or mistreated at a marine park, contact the national headquarters of the U.S. Department of Agriculture: