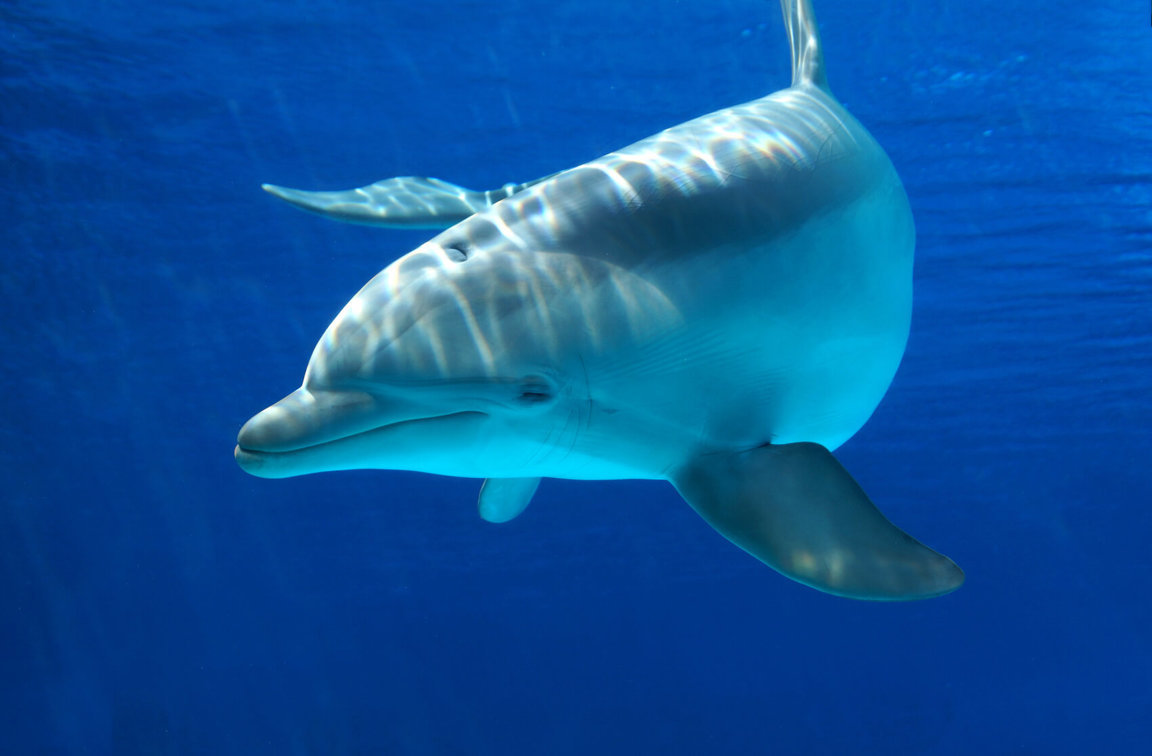 Dolphins are often regarded as one of earth's most intelligent animals. They are social, living in pods of up to a dozen individuals. In places with a high abundance of food, pods can merge temporarily, forming a superpod; such groupings may exceed 1,000 dolphins. Individuals communicate using a variety of clicks, whistles and other vocalizations. They make ultrasonic sounds for echolocation. Membership in pods is not rigid; interchange is common. However, dolphins can establish strong social bonds; they will stay with injured or ill individuals, even helping them to breathe by bringing them to the surface if needed.

Dolphins also display culture, something long believed to be unique to humans. Indo-Pacific bottlenose dolphins are known to teach their young to use tools. They cover their snouts with sponges to protect them while foraging. This knowledge is mostly transferred by mothers to daughters. Using sponges as mouth protection is a learned behavior. Another learned behavior was discovered among river dolphins in Brazil, where some male dolphins use weeds and sticks as part of a sexual display.

Play is an important part of dolphin culture. Dolphins play with seaweed and play-fight with other dolphins. They play and harass other local creatures, like seabirds and turtles. Dolphins enjoy riding waves and frequently surf coastal swells and the bow waves of boats, at times “leaping” between the dual bow waves of a moving catamaran. Occasionally, they playfully interact with swimmers.

Pesticides, heavy metals, plastics, and other industrial and agricultural pollutants that do not disintegrate rapidly in the environment concentrate in predators such as dolphins. Injuries or deaths due to collisions with boats, especially their propellers, are also common.

Various fishing methods, most notably purse seine fishing for tuna and the use of drift and gill nets, kill many dolphins. By-catch in gill nets and incidental captures in antipredator nets that protect marine fish farms are common and pose a risk for mainly local dolphin populations. In some parts of the world, such as Taiji in Japan and the Faroe Islands, dolphins are killed in harpoon or drive hunts. Dolphin meat is high in mercury, and may thus pose a health danger to humans when consumed.

Dolphin safe labels attempt to reassure consumers fish and other marine products have been caught in a dolphin-friendly way. The original deal with "Dolphin safe" labels was brokered in the 1980s between marine activists and the major tuna companies, and involved decreasing incidental dolphin kills by up to 50% by changing the type of nets being used to catch the tuna. Dolphins continue to be netted while fishermen are in pursuit of smaller tuna. Albacore are not netted this way, which makes albacore the only truly dolphin-safe tuna.

Loud underwater noises, such as those resulting from naval sonar use, live firing exercises, or certain offshore construction projects, such as wind farms, may be harmful to dolphins, increasing stress, damaging hearing, and causing decompression sickness by forcing them to surface too quickly to escape the noise.

A number of militaries have employed dolphins for various purposes, from finding mines to rescuing lost or trapped humans. The military use of dolphins drew scrutiny during the Vietnam War when rumors circulated that the United States Navy was training dolphins to kill Vietnamese divers. Dolphins are still being trained by the United States Navy on other tasks as part of the U.S. Navy Marine Mammal Program. The Russian military is believed to have closed its marine mammal program in the early 1990s. In 2000 the press reported that dolphins trained to kill by the Soviet Navy had been sold to Iran.

Dolphin drive hunting, also called dolphin drive fishing, is a method of hunting dolphins and occasionally other small cetaceans by driving them together with boats and then usually into a bay or onto a beach. Their escape is prevented by closing off the route to the open sea or ocean with boats and nets. Dolphins are hunted this way in several places around the world, including the Solomon Islands, the Faroe Islands, Peru and Japan, the most well-known practitioner of this method. Dolphins are mostly hunted for their meat; some are captured and end up in dolphinariums.

Despite the highly controversial nature of the hunt resulting in international criticism, and the possible health risk that the often polluted meat causes, many thousands of dolphins are caught in drive hunts each year.

In Japan, striped, spotted, Risso's, and bottlenose dolphins are most commonly hunted, but several other species such as the false killer whale are also occasionally caught. A small number of orcas have been caught in the past. Relatively few striped dolphins are found in the coastal waters, probably due to hunting.

The Japanese town of Taiji on the Kii peninsula is, as of now, the only town in Japan where drive hunting still takes place on a large scale. In the town of Futo the last known hunt took place in 2004. In 2007 Taiji wanted to step up its dolphin hunting programs, approving an estimated ¥330 million for the construction of a massive cetacean slaughterhouse in an effort to popularize the consumption of dolphins in the country.

Dolphin welfare advocacy groups such as Earth Island Institute, Surfers for Cetaceans and Dolphin Project Inc., assert that the number of dolphins and porpoises killed is estimated at 25,000 per year.

In Japan, the hunting is done by a select group of fishermen. When a pod of dolphins has been spotted, they're driven into a bay by the fishermen while banging on metal rods in the water to scare and confuse the dolphins. When the dolphins are in the bay, it is quickly closed off with nets so the dolphins cannot escape. The dolphins are usually not caught and killed immediately, but instead left to calm down over night. The following day, the dolphins are caught one by one and killed. The killing of the animals used to be done by slitting their throats, but the Japanese government banned this method and now dolphins may officially only be killed by driving a metal pin into the neck of the dolphin. It is not clear if this ban is strictly enforced however.

Some of the captured dolphins are left alive and taken to dolphinariums. Dolphins have also been exported to the United States for several parks including the well known SeaWorld parks. The US National Marine Fisheries Service has refused a permit for Marine World Africa USA on one occasion to import four false killer whales caught in a Japanese drive hunt. In recent years, dolphins from the Japanese drive hunts have been exported to China, Taiwan and to Egypt. On multiple occasions, members of the International Marine Animal Trainers Association (IMATA) have also been observed at the drive hunts in Japan.

Protest and campaigns are now common in Taiji. Some of the animal welfare organizations campaigning against the drive hunts are Sea Shepherd, One Voice, Blue Voice, the Whale and Dolphin Conservation Society, and the World Society for the Protection of Animals. Since much of the criticism is the result of photos and videos taken during the hunt and slaughter, it is now common for the final capture and slaughter to take place on site inside a tent or under a plastic cover, out of sight from the public.

On a smaller scale, drive hunting for dolphins also takes place on the Solomon Islands, more specifically on the island of Malaita. Dolphin's teeth are also used in jewelry and as currency on the island. The dolphins are hunted in a similar fashion as in Japan, using stones instead of metal rods to produce sounds to scare and confuse the dolphins. Various species are hunted, such as spotted and spinner dolphins. The amount of dolphins killed each year is not known, but anecdotal information suggests between 600 and 1,500 dolphins per hunting season. The hunting season lasts roughly from December to April, when the dolphins are closest to shore. As in Japan, some dolphins (exclusively bottlenoses) from the Solomon Islands have also been sold to the entertainment industry. There was much controversy in July 2003, when 28 Indo-Pacific bottlenose dolphins (Tursiops trancatus aduncus) were exported to Parque Nizuc, a water park in Cancun. A large portion of the animals were later transported to Cozumel, to do interaction programs. Though the export of dolphins had been banned in 2005, the export of dolphins was resumed in October 2007 when the ban was lifted following a court decision, allowing for 28 dolphins to be sent to a dolphinarium in Dubai. A further three dolphins were found dead near the holding pens. The dealer that exported these dolphins has stated that they intend to release their 17 remaining dolphins back into the wild in the future.

On the Faroe Islands mainly Pilot Whales are killed by drive hunts for their meat. Other species are also killed on rare occasion such as the Northern bottlenose whale and Atlantic white-sided dolphin. The hunt is known by the locals as the Grindadráp. There are no fixed hunting seasons, as soon as a pod close enough to land is spotted fishermen set out to begin the hunt. The animals are driven onto the beach with boats, blocking off the way to the ocean. When on the beach, most of them get stuck. Those that have remained too far in the water are dragged onto the beach by putting a hook in their blowhole. When on land, they are killed by cutting down to the major arteries and spinal cord at the neck. The time it takes for a dolphin to die varies from a few seconds to a few minutes, depending on the cut. When the fishermen fail to beach the animals all together, they are let free again. About a thousand pilot whales are killed this way each year on the Faroe Islands together with usually a few dozen, up to a few hundred, animals belonging to other small cetaceans species...but numbers vary greatly per year. The brutal appearance of the hunt has resulted in international criticism especially from animal welfare organizations. As in Japan, the meat is contaminated with mercury and cadmium, causing a health risk for those frequently eating it.

Though it is forbidden under Peruvian law to hunt dolphins or eat their meat, a large number of dolphins are still killed illegally by fishermen each year. Although exact numbers are not known, the Peruvian organization Mundo Azul (Blue World) estimates that at least a thousand are killed annually. To catch the dolphins, they are driven together with boats and encircled with nets, then harpooned, dragged on to the boat, and clubbed to death if still alive. Various species are hunted, such as the bottlenose and dusky dolphin.