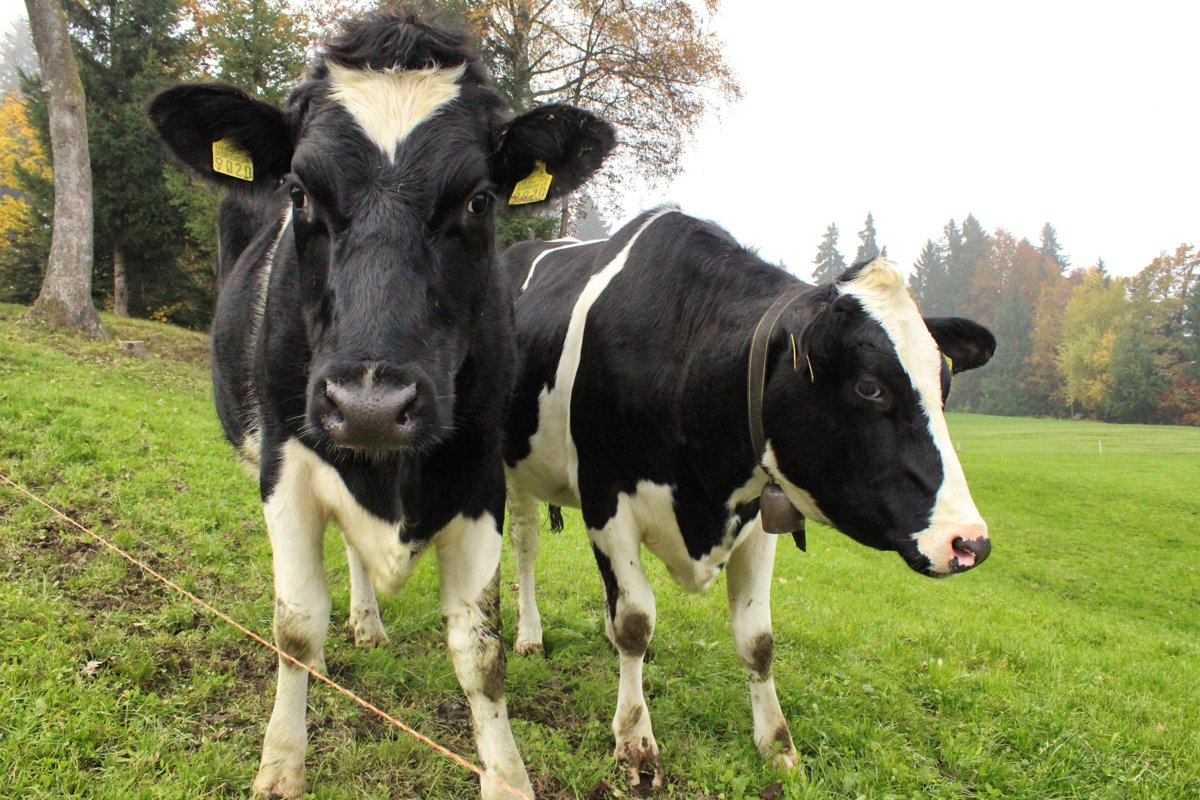 Cattle, as individuals or as a herd, possess many unique traits, the most distinctive being their social disposition. They are extremely social animals and rely heavily on "safety in numbers"— herds can form with up to 300 animals.

Each animal can recognize more than 100 individuals and will closely bond to some herd members, while carefully avoiding others. While the bond between mothers and daughters is particularly strong, calves also maintain lifelong friendship with other herd members.

It is thought that cattle were first domesticated in 6,500 B.C. from wild cattle in Europe and the Near East. Only in the past two centuries have cattle been differentiated into breeds raised for beef or milk. Some cattle still exist as "dual purpose" breeds.

Cows are sturdy yet gentle animals. They are social animals and form strong bonds with their families and friends that can last their entire lives. The bond between a cow and her calf is especially powerful. If a mother cow is caught on the opposite side of a fence from her calf, she will become alarmed, agitated and call frantically. If they remain separated, she will stay by the fence through blizzards, hunger, and thirst, waiting to be reunited with her baby. This bond continues even after the calf is fully grown.

Cattle usually stand between 4 feet, 9 inches and 5 feet, 6 inches, and “beef cattle” range from 850 to 2,500 pounds depending on breed and gender. In non-commercial herds, cows have been observed nursing their male calves for up to three years.

Cattle have almost panoramic vision, which allows them to watch for predators or humans. They can see in color, except for red. They have an amazing sense of smell, and can detect scents more than six miles away.

Cattle are ruminant herbivores and will swallow vegetation whole, then later masticate their "cud" (chew their partially digested food).

The scientific name for the cattle group is "bos taurus," a subfamily of the bovidae family, which includes other hollow-horned animals. Interestingly, bulls are much less likely to use their horns than cows. However, the level of aggression can be influenced by the degree of confinement.

Cattle enjoy swimming and running in the moonlight, as they have been shown to remain active for a longer period between their two sleep sessions when the moon is full.

Cattle are gregarious animals who, in a more natural environment, would live in complex social groups. They would choose a leader and form close friendships, grooming and licking one other to show their affection. Cattle-farming upsets this hierarchy in many ways, because new members and divisions of the herd occur frequently and this can be very disruptive.

Cattle bred for beef may be kept in a variety of systems. Frequently they are kept in windowless fattening sheds until ready for slaughter. They have little room to move and no access to the outside, to feel fresh air and sunlight.

Cattle are stunned by a shot into their brain from a captive-bolt pistol. Frequently they struggle or move around because they are terrified by the situation, so sometimes the bolt misses the mark and the cattle are not stunned. Thus they are conscious while being killed by having their throat slit and bleeding to death.

Purchasing leather ensures the continuity of a massive industry based on animal suffering. The leather industry makes a huge profit each year, mainly from cattle and calf skins.

Most cows are now artificially inseminated. The cow is tied up and one hand of the inseminator manipulates the cervix through the rectum wall while the other discharges semen into the vagina and cervix using an inseminating gun. This is uncomfortable and stressful for the cow.

Both the mother and calf suffer greatly at the hands of the milk industry. Dairy cows have been selectively bred to produce ten times more milk than they would naturally need to feed their calves. This can lead to mastitis, a painful udder infection, and lameness when they are forced to stand all day in the cow shed. In order to produce milk the mother must be kept continually pregnant. So three months after she has given birth, and while she is still producing milk, she will be made pregnant. This puts a huge strain on her. Moreover, the calf is taken away soon after birth so that any milk produced by the cow can be sold for humans to drink. The mother and calf form a strong bond very quickly and the cow continuously calls after her calf has been taken away from her. The separation also causes a lot of confusion and distress for the calf. The cow is put through this heart-breaking and exhausting procedure not once, but an average of five times, until she is deemed to be no ‘use’ to the farmer and killed.

The calf is usually disbudded, whereby a heated iron is applied to the horn buds to stop the horns from growing. This is painful and stressful. Male cattle are also castrated by methods that cause the animal acute pain. Female calves are often kept to produce milk. Male calves are usually sent abroad for veal or deemed ‘useless’ and killed.

On organic farms the dairy cow still has to deal with continual pregnancies, and the mother and calf are still separated very soon after birth. Castration and disbudding of calves may still be carried out, and, as on nonorganic farms, slaughter is inevitable.