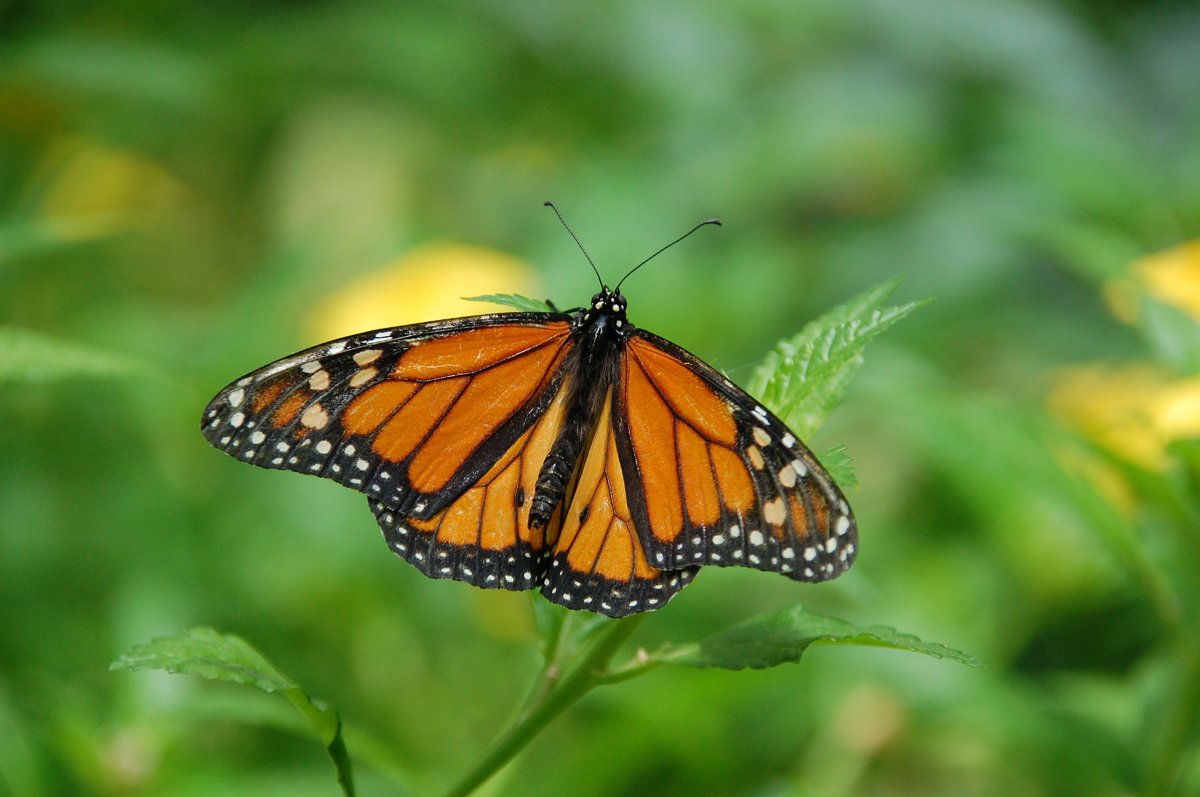 Monarch butterflies (Danaus plexippus) are among the most beautiful creatures on earth, and the annual monarch butterfly migration is one of nature’s greatest spectacles. The monarch is among the most recognized, studied, and loved of all of North America’s insects. Children study monarchs in school. Researchers and citizen scientists track their migration and breeding. Conservationists and government agencies are concerned about threats to breeding, migration, and wintering habitats.

The annual migration cycle of the monarch butterfly has been described as the most spectacular in the insect world. It has been called an “endangered natural phenomenon”. This species and their migration are dependent upon conservation of habitats in all three North American countries: Canada, the United States, and Mexico.

Each year as many as 60 million to one billion monarch butterflies make the journey, spanning more than 2,500 miles, from North America to the cool Sierra Madre mountain range of western central Mexico. Since pre-Hispanic times, Purépecha Indians have recorded the arrival of the long, flowing cloud of orange-winged butterflies that pours into the Sierra Madre hills at precisely the same time each year. Those millions of monarch butterflies will spend the winter clustered in the boughs of evergreen trees, high up a few isolated peaks, in small areas of the Monarch Butterfly Biosphere Reserve - a national protected area and nature preserve that covers more than 200 square miles.

The monarchs that migrate to Mexico are the final generation of a cycle that begins anew each year. It is their children's grandchildren (their great grandchildren) that will return south the following fall to winter in forests they have never seen. The butterflies in this final generation began life in the northern United States or southern Canada, hatched from eggs laid on the underside of milkweed leaves. The eggs hatched as larva or caterpillars. The caterpillars became pupa (chrysalis) that matured into adult butterflies. The caterpillars devoured their eggshells and began the search for food, feeding on plants in the milkweed family. Each time they outgrew their exterior skin (called a cuticle), they molted, ate the skin, and continued growing. To allow for this rapid increase in size, the caterpillar went through five cycles of molting before once again attaching to the underside of a milkweed leaf. There the animal formed a delicate and beautiful chrysalis. The developing butterfly matured for several weeks inside the chrysalis. When it was time to emerge, the insect pushed legs downward, split the chrysalis and set free. The newly hatched butterfly pumped fluid into the wings, which then hardened, allowing the monarch to fly.

It takes a full year for the completion of the annual monarch butterfly migration, taking 2-3 generations of monarchs to make the journey north from Texas and southern Canada, but only 1 generation to make the entire trip back south to Mexico.

Awareness of the monarch butterfly’s life cycle and habitat requirements is essential for their survival and an important step in the conservation of this animal. Many government agencies, organizations, and individuals across North America are working on projects to conserve monarch habitats and their migration.

The monarch butterfly, like other insects, has several life forms and stages prior to reaching adulthood. The monarch has four distinct life stages: egg, larva (caterpillar), pupa (chrysalis), and adult. Monarchs have up to four generations each summer, each one traveling a little further north than the last. The last generation of the year migrates south.

During the summer breeding season, monarchs live only 2 to 5 weeks, mating and laying the eggs that become the next generation. Each generation slowly makes their way north. The last generation of the year does not become reproductive and is said to be in “reproductive diapause”. These butterflies, that live up to 9 months, are the ones that migrate south where they overwinter. The migratory generation has an enormous task ahead of them. Weighing less than a gram, these unique butterflies will fly between 2,000 to 3,000 miles to their overwintering location. They do not become reproductive until February and March as they move north again, laying eggs on milkweeds to start the process of moving northward anew.

The annual migration of North America’s monarch butterfly is a unique and amazing phenomenon. The monarch is the only butterfly known to make a two-way migration as birds do. Unlike other butterflies that can overwinter as larvae, pupae, or even as adults in some species, monarchs cannot survive the cold winters of northern climates.

Using environmental cues, the monarchs know when it is time to travel south for the winter. Monarchs use a combination of air currents and thermals to travel long distances. Some fly as far as 3,000 miles to reach their winter home. Monarchs can travel between 50-100 miles a day; it can take up to two months to complete their journey. The farthest ranging monarch butterfly recorded traveled 265 miles in one day.

The eastern population of North America’s monarchs overwinters in the same 11 to 12 mountain areas in the States of Mexico and Michoacan from October to late March. Monarchs living west of the Rocky Mountain range in North America overwinter in California along the Pacific coast near Santa Cruz and San Diego. Here microclimatic conditions are very similar to that in central Mexico. Monarchs roost in eucalyptus, Monterey pines, and Monterey cypresses in California.

The mountain hillsides of oyamel forest provide an ideal microclimate for the butterflies. Here temperatures range from 0 to 15 degrees Celsius. If the temperature is lower, the monarchs will be forced to use their fat reserves. The humidity in the oyamel forest assures the monarchs won’t dry out allowing them to conserve their energy.

Researchers are still investigating what directional aids monarchs use to find their overwintering location. It appears to be a combination of directional aids such as the magnetic pull of the earth and the position of the sun among others, not one in particular.

Monarchs cluster together to stay warm. Tens of thousands of monarchs can cluster on a single tree. Although monarchs alone weigh less than a gram, tens of thousands of them weigh a lot. Oyamel trees are generally able to support the clustering butterflies, but sometimes branches break.

Fall monarchs look like all other monarchs, but they are physiologically different. They are in a state of suspended development without mature internal sex organs.

Eastern North American monarchs fly south using several flyways then merge into a single flyway in Central Texas. It is truly amazing that these monarchs know the way to the overwintering sites even though this migrating generation has never before been to Mexico.

Monarchs only travel during the day and need to find a roost at night. Monarchs gather close together during the cool autumn evenings. Roost sites are important to the monarch migration. Many of these locations are used year after year. Often pine, fir and cedar trees are chosen for roosting. These trees have thick canopies that moderate the temperature and humidity at the roost site. In the mornings, monarchs bask in the sunlight to warm themselves.

Some monarchs traveling south congregate on peninsulas. The shape of the peninsula funnels the migrating butterflies. At its tip, the monarchs find the shortest distance across open water. They congregate along the shore to wait for a gentle breeze to help them across.

As warm temperatures and lengthening days arrive, the migratory generation of monarchs finishes the development they halted prior to their migration. They become reproductive, breed and lay the eggs of the new generation. This starts the northern journey back to North America. Unlike the generation before them, who made a one-generation journey south, successive generations make the journey north.

Generation 1 monarchs are the offspring of the monarchs who overwintered in Mexico. Each successive generation travels farther north. It will take 3-4 generations to reach the northern United States and Canada.

Many butterflies have a single plant required as a food source for their larval form called a host plant. Milkweed is the host plant for the monarch butterfly. Without milkweed, the larva would not be able to develop into a butterfly. Monarchs use a variety of milkweeds.

Whether it’s a field, roadside area, open area, wet area, or urban garden; milkweed and flowering plants are needed for monarch habitat. Adult monarchs feed on the nectar of many flowers, but they breed only where milkweeds are found.

Milkweed contains a a variety of chemical compounds that make monarch caterpillars poisonous to potential predators. Milkweeds contain a cardiac (heart) poison that is poisonous to most vertebrates (animals with backbones) but does not hurt the monarch caterpillar. Some milkweed species have higher levels of these toxins than others. Monarchs show preference to some milkweed species.

The adult monarch and monarch larvae are both brightly colored serving as a warning to potential predators that they are poisonous. Unsuspecting predators only need to taste a monarch butterfly or larva once to learn not to eat them again. Most animals quickly spit them out. The Viceroy butterfly takes advantage of the protective coloration of the monarch butterfly by “mimicking”, or copying the colors and pattern of the monarch wing. With similar coloration, the viceroy can be mistaken for a monarch and is safe from these “educated” predators.

The number of monarch butterflies is rapidly declining. Milkweeds, the food and breeding source for monarchs, have experienced a decline throughout the breeding range of this butterfly. In some areas milkweeds are considered to be weeds. Certain milkweed species are considered noxious because they can be poisonous to cattle and other livestock. In some locations it is difficult to improve habitat for monarch butterflies because of the status of milkweed. Eradication of milkweed is a threat to the monarch butterfly.

Additional threats to monarch butterflies include herbicides and pesticides.

The persistence of the monarch butterfly’s spectacular and unique migratory phenomenon is dependent on the conservation of habitats in Canada, the United States, and Mexico. No species better symbolizes the ecological links among the three countries. Urge government officials to conserve monarch habitats. Every backyard can become an oasis for monarchs and other pollinators, even in cities. Schools, youth and community groups, businesses, and state and local governments can engage in planting native milkweed and protecting monarch habitat along roadsides, rights of way, and other public and private lands. Refrain from using harmful herbicides and pesticides.