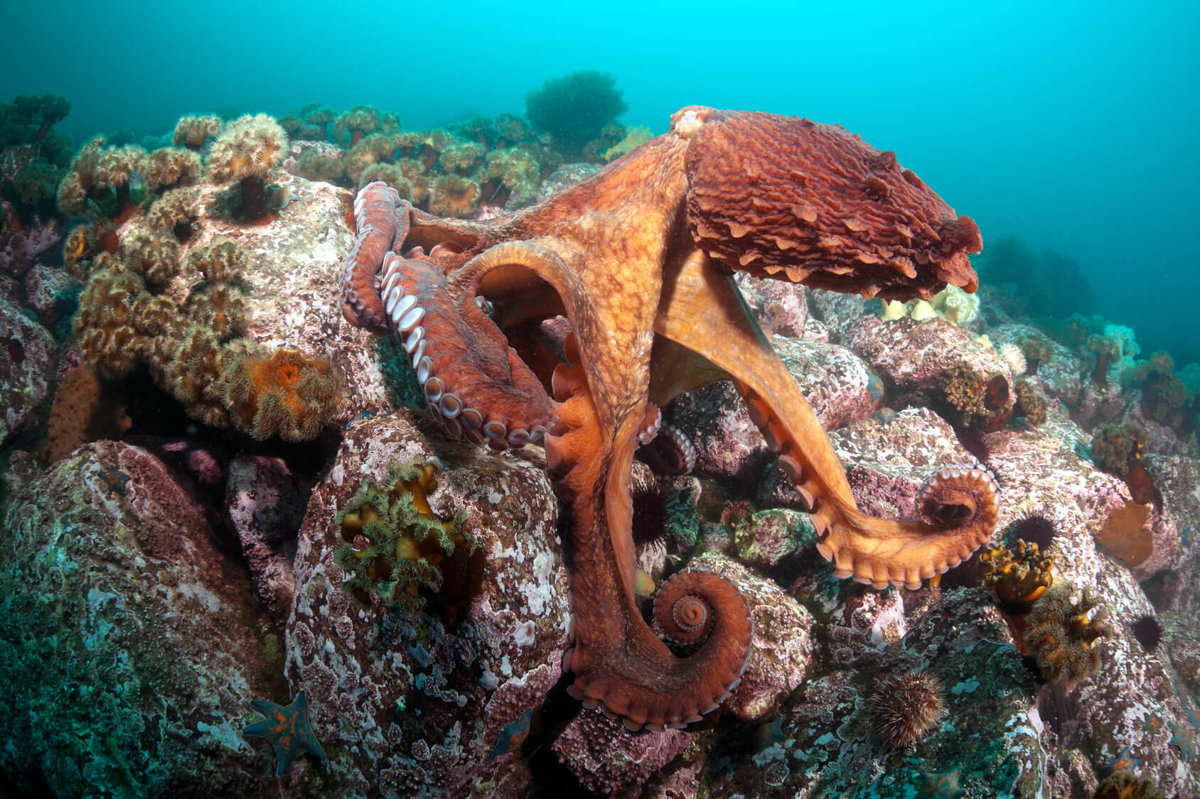 The octopus is a cephalopod of the order Octopoda that inhabits many diverse regions of the ocean, especially coral reefs. The term may also refer to only those creatures in the genus Octopus. In the larger sense, there are 289 different octopus species, which is over one-third the total number of cephalopod species.

Octopuses are characterized by their eight arms (not tentacles), usually bearing suction cups. Unlike most other cephalopods, the majority of octopuses have almost entirely soft bodies with no internal skeleton. They have neither a protective outer shell, nor an internal shell or bones, like cuttlefish or squids. A beak, similar in shape to a parrot's beak, is their only hard part. This enables them to squeeze through very narrow slits between underwater rocks, which is very helpful when they are fleeing from morays or other predatory fish. The octopuses in the less familiar Cirrata suborder, however, have two fins and an internal shell...generally lessening their ability to squeeze into small spaces.

Octopuses have a relatively short life span, and some species live for as little as six months. Larger species, such as the North Pacific giant octopus, may live for up to five years under suitable circumstances. However, reproduction is a cause of death: males can only live for a few months after mating, and females die shortly after their eggs hatch, for they neglect to eat during the (roughly) one month period spent taking care of their unhatched eggs.

Octopuses have three hearts. Two pump blood through each of the two gills, while the third pumps blood through the body. Octopus blood contains the copper-rich protein hemocyanin for transporting oxygen. Less efficient than the iron-rich hemoglobin of vertebrates, the hemocyanin is dissolved in the plasma instead of being bound in red blood cells and gives the blood a blue color. Octopuses draw water into their mantle cavity where it passes through its gills.

Three defensive mechanisms are typical of octopuses: ink sacs, camouflage and autotomising limbs. Most octopuses can eject a thick blackish ink in a large cloud to aid in escaping from predators. They also have specialized skin cells, called chromatophores, for both color changing and light reflection and refraction. They use this ability to blend into the environment to hide, communicate with or warn other octopuses. The very poisonous Blue-ringed octopus becomes bright yellow with blue rings when it is provoked. When under attack, some octopuses can autotomise their limbs, in a similar manner to skinks and other lizards. The crawling arm serves as a distraction to would-be predators; this ability is also used in mating. A few species, such as the Mimic octopus, have a fourth defense mechanism. They can combine their highly flexible bodies with their color changing ability to accurately mimic other, more dangerous animals such as lionfish and eels.

When octopuses reproduce, males use a specialized arm called a hectocotylus to insert spermatophores (packets of sperm) into the female's mantle cavity. The hectocotylus is usually the third right arm. In some species, the female octopus can keep the sperm alive inside her for weeks until her eggs are mature. After they have been fertilized, the female lays roughly 200,000 eggs (this figure dramatically varies between families, genera, species and also individuals). The female hangs these eggs in strings from the ceiling of her lair, or individually attached to the substratum depending on the species. After the eggs hatch, the young larval octopuses must spend a period of time drifting in clouds of plankton, where they feed on copepods, larval crabs and larval seastars until they are ready to sink down to the bottom of the ocean, where the cycle repeats itself. In some deeper dwelling species, the young do not go through this period. This is a dangerous time for the octopuses; as they become part of the plankton cloud they are vulnerable to many plankton eaters.

Octopuses are highly intelligent. Maze and problem-solving experiments show that they have both short and long term memory. An octopus has a highly complex nervous system, only part of which is localized in its brain. Two-thirds of an octopus's neurons are found in the nerve cords of its arms, which have a remarkable amount of autonomy. Octopus arms show a wide variety of complex reflex actions arising on at least three different levels of the nervous system. Some octopuses, such as the mimic octopus, will move their arms in ways that emulate the movements of other sea creatures. Octopuses can be readily trained to distinguish between different shapes and patterns. They are able to open jars after learning from observation. Octopuses have also been observed in what may be described as play; repeatedly releasing bottles or toys into a circular current in their aquariums and then catching them. Octopuses often break out of their aquariums and sometimes into others in search of food. They have even boarded fishing ships and opened holds to eat crabs.

Octopuses have keen eyesight. Although their slit-shaped pupils might be expected to afflict them with astigmatism, it appears that this is not a problem in the light levels in which an octopus typically hunts. Surprisingly, they do not appear to have color vision, although they can distinguish the polarization of light. Attached to the brain are two special organs, called statocysts, that allow the octopus to sense the orientation of its body relative to horizontal. An autonomic response keeps the octopus's eyes oriented so that the pupil slit is always horizontal. Octopuses also have an excellent sense of touch. The octopus's suckers are equipped with chemoreceptors so that the octopus can taste what it is touching. The arms contain tension sensors so that the octopus knows whether its arms are stretched out.

Octopuses move about by crawling or swimming. Their main means of slow travel is crawling, with some swimming. Their only means of fast travel is swimming. Their fastest movements only occur when provoked by hunger or if in danger. They crawl by walking on their arms, usually on many at once, on solid surfaces, while supported in water. They swim by expelling a jet of water from a contractile mantle, and aiming it via a muscular siphon.

The octopus faces such threats as polluted water, as well as diminishing resources due to environmental exploitation.

Octopuses are threatened by the exotic pet trade. They are difficult to keep in captivity. They often escape even from supposedly secure tanks, due to their problem-solving skills, mobility and lack of rigid structure. Every year, a variety of sources provides millions of animals to the exotic pet trade. Animals are captured from their native habitat and transported to various countries to be sold as “pets”. Others are surplus animals from zoos or their offspring. Backyard breeders also supply exotic animals. The sellers of these animals often disregard state or local laws regulating private possession of exotics,  and the dangers, difficulties, physical and physiological needs of the animals they peddle. The suffering of the animals in the hands of unqualified and hapless buyers appears to be of no concern in the lucrative exotic pet trade.

Octopuses are also victims of the animal entertainment industry. The use of these wild animals as entertainment in aquariums removes them from their natural habitat; depriving them of the ability to freely engage in instinctual behaviors. Both children and adults are desensitized to animal mistreatment by the animal entertainment industry. Even under the best of circumstances, captivity is cruel for wild animals. Confined to tiny enclosures and gawked at by crowds, animals in exhibits and acts endure constant stress. Without exercise, they become listless, their immune systems are weakened, and they become prone to sickness; many resort to self-mutilation in reaction to stress or boredom. Mental illness is rampant among confined animals. Torn from their families and deprived of all dignity, every part of their lives is controlled by their captors. While zoos and aquariums may appear to be educational and conservation-oriented, most are designed with the needs and desires of the visitors in mind, not the needs of the animals.