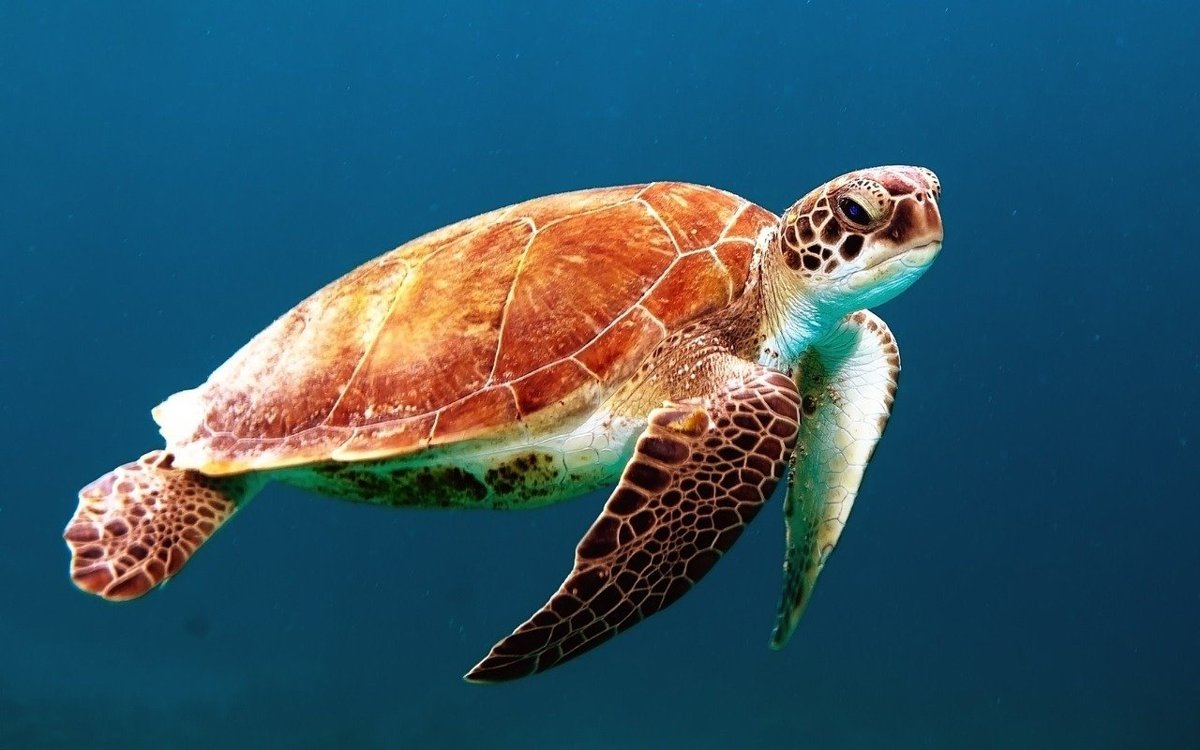 Loggerhead (Caretta caretta) sea turtles have reddish-brown markings, can reach 33 to 40 inches in length and weigh 150 to 400 pounds. One of the two main loggerhead nesting areas is located along the Atlantic coast of Florida.

All sea turtles are protected by the Endangered Species Act, which lists all species as endangered except the loggerhead, which is listed as threatened. Marine turtles are one of the earth's most ancient creatures, with a fossil record going back 150 million years. Some estimates suggest they first appeared on earth as much as 230 million years ago, making them 224 million years older than humans.

Sea turtles are generally found in the waters over continental shelves. After taking to the water for the first time, males will not return to shore again. During the first three to five years of life, sea turtles spend most time in the pelagic zone floating in seaweed beds. Green sea turtles in particular are often found in Sargassum beds, a brown seaweed in which they find shelter and food. Once the sea turtle has reached adulthood it moves closer to the shore. Females will come ashore to lay their eggs on sandy beaches during the nesting season.

The habitat of a sea turtle has a significant influence on its morphology. Sea turtles are able to grow so large because of the immense size of their habitat: the ocean. The reason that sea turtles are much bigger than land tortoises and freshwater turtles is directly correlated with the vastness of the ocean, and the fact that they travel such far distances. Having more room to live enables more room for growth.

There are seven species of sea turtles:

Green (Chelonia mydas): Medium to large sized, brownish turtle with mottled patterns of markings on its shell. The green sea turtle usually lives among sea grass. The green turtle measures 36 to 43 inches and weighs 200 to 300 pounds.

Hawksbill (Eretmochelys imbricata): Small-to medium-sized turtle with shield-like plates on its shell. The hawksbill turtle is the source of the term "tortoise shell" because of the pattern of markings on its shell. Their beautiful shells were once prized until the hunting of sea turtles became illegal. The hawksbill gets its name from its beak which is shaped like a hawk’s. They measure 30 to 36 inches and weighs 100 to 200 pounds.

Kemp’s Ridley (Lepidochelys kempii): The smallest and the most endangered of all the sea turtles, the Kemp’s Ridley has an oval-shaped shell that is olive-gray in color. On average, it reaches up to 30 inches long and weighs 80 to 100 pounds.

Olive Ridley (Lepidochelys olivacea): This turtle is named for its olive-colored shell. The Olive Ridley has a wide, heart-shaped shell and a greenish-white underside. It is 24 to 30 inches long and weighs 90 to 100 pounds.

Leatherback (Dermochelys coriacea): This species is the largest living sea turtle. They average six feet long and can weigh 1,400 pounds. The leatherback has large limbs and no claws. It does not have a shell but instead has a leathery back with raised gray stripes.

Loggerhead (Caretta caretta): The loggerhead has reddish-brown markings, it can reach 33 to 40 inches in length and weigh 150 to 400 pounds. One of the two main loggerhead nesting areas is located along the Atlantic coast of Florida.

Australian Flatback (Natator depressus): This turtle is named for its flat back and because it is found only in the waters of Australia. The Australian flatback can weigh up to 200 pounds and reach 40 inches in length.

The worldwide population for each species is unknown.

Most sea turtles live approximately 15 to 20 years and may live to be 80 years old. They are found in warm and temperate waters throughout the world and migrate hundreds of miles between nesting and feeding grounds. Sea turtles eat jellyfish, seaweed, crabs, shrimp, snails, algae and mollusks.

Sea turtles spend most of their time in the water. When they do come to the shore, to lay eggs for example, traveling on land is awkward. Pregnant females pull themselves ashore, dig a pit into the sandy beach, and lay 70-170 eggs. Female turtles typically return to the same beach where they were hatched to lay eggs. Six to ten weeks later, baby turtles break out of this nest and scuttle down the beach into the sea. Young sea turtles swim towards kelp beds several miles offshore, where they shelter, feed and grow. During their early life stages, baby sea turtles are highly vulnerable and most do not reach adulthood.


Sea turtles play key roles in two ecosystem types that are critical to them as well as to humans - oceans and beaches/dunes. In the oceans, sea turtles, especially green sea turtles, are one of very few creatures (manatees are another) that eat the sea grass that grows on the sea floor. Sea grass needs to be constantly cut short to help it grow across the sea floor. Sea turtles act as grazing animals that cut the grass short and help maintain the health of the sea grass beds. Sea grass beds provide breeding and developmental grounds for numerous species of fish, shellfish and crustaceans. Without sea grass beds, many marine species would be lost, as would the lower levels of the food chain. The reactions could result in many more marine species eventually becoming endangered or extinct. Beaches and dunes form a fragile ecosystem that depends on vegetation to protect against erosion. Eggs, hatched or unhatched, and hatchlings that fail to make it into the ocean are nutrient sources for dune vegetation. Dune vegetation is able to grow and become stronger with the presence of nutrients from sea turtle eggs, unhatched nests, eggs and trapped hatchlings. As the dune vegetation grows stronger and healthier, the health of the entire beach/dune ecosystem becomes better. Stronger vegetation and root systems help to hold the sand in the dunes and help protect the beach from erosion.

Sea turtles are threatened with capture, harvesting of eggs, destruction of nesting beaches, ocean pollution, oil spills and entanglement in fishing and shrimp nets. Major threats to sea turtles in the U.S. include, but are not limited to: destruction and alteration of nesting and foraging habitats; incidental capture in commercial and recreational fisheries; entanglement in marine debris; and vessel strikes. To reduce the incidental capture of sea turtles in commercial fisheries, NOAA Fisheries has enacted regulations to restrict certain U.S. commercial fishing gears (gillnets, longlines, pound nets, and trawls) that have known, significant bycatch of sea turtles. To effectively address all threats to marine turtles, NOAA Fisheries and the USFWS have developed recovery plans to direct research and management efforts for each sea turtle species.

The tourist trade is the main reason why turtle numbers are in decline. Tourism poses the greatest threat to turtles for a number of reasons. Turtles migrate huge distances but during certain times of the year they congregate in shallow waters to breed. Females go ashore to lay clutches of up to 150 eggs. Two months later, tiny hatchlings emerge from the sand and make their way to the sea. But many of the tropical and sub-tropical beaches that turtles have used for millions of years are now inhabited by tourists. Many females will not lay their eggs if there is too much noise or lighting from local resorts. Also, nests can be damaged by sunbathers and newly hatched turtles can become disoriented by beachfront developments and may never reach the sea. In the Mediterranean, the nesting period of the loggerhead and green turtle coincide almost exactly with the peak tourist season (May to August).

Speedboats can be deadly, especially during the mating season when turtles spend long periods of time close to the surface. Turtles are also still killed for their shells, which are made into souvenirs such as combs and ashtrays.