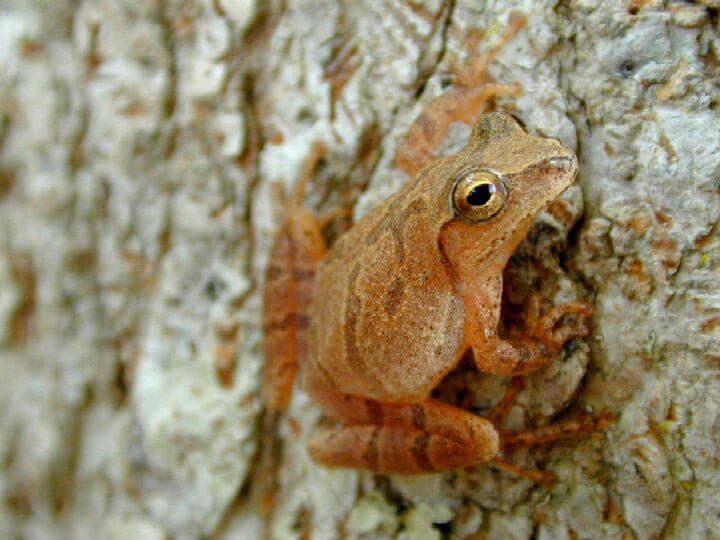 On rainy nights, in late March or early April, if you’re lucky enough to be in the right place, at the right time, you will hear the almost eerie sound of the spring peepers. These tiny treefrogs and the equally vocal wood frogs sing at night, in the rain, when temperatures are above 40 degrees.
Spring Peepers, also called Chorus Frogs, are amphibians (animals that live part of their lives in water and part on land). Though they rarely climb a tree above the level of your knee, these little gems are a type of treefrog.

Spring Peepers are very small, about the size of a nickel, and brown-green, with "X" marks on their backs. This coloring allows them to blend into the background, so predators, including curious humans, can’t find them. During this season, the throats of the male are gray in color and, surprisingly, they also have mustaches.

A Spring Peeper pushes air out of a sac in its throat and draws it quickly back in, to make two clear notes. “Peep out! Peep in!” The call of male Spring Peepers forms a loud chorus, each singing its high-pitched song.

Spring Peepers will begin to appear in February or March, when the ground has thawed and the cold rains of early spring soften the earth. They gather at pools and puddles filled by winter rains and snowmelt. Woodland ponds surrounded by bushes, with branches and twigs in and above the water, are perfect for them. Like all treefrogs, they have sticky round toepads that they use to climb and cling to the twigs and bark. You'll also find Spring Peepers in fields and other low places, where they cling to stalks of grass.

Male Spring Peepers call out from their perches, peeping to attract a mate. They prefer to stay close to the deepest end of these temporary pools; the better to jump into the water and hide if anything threatening comes too close. ‘Though harbingers of spring, sometimes, you may also hear a lone male peeper calling in the autumn.

Frog populations have declined dramatically since the 1950s: more than one third of species are believed to be threatened with extinction and more than 120 species are suspected to be extinct since the 1980s. Habitat loss is a significant cause of frog population decline, as are pollutants, the introduction of non-indigenous predators/competitors, and emerging infectious diseases.

Frogs are threatened by the inhumane pet trade. Every year, a variety of sources provides millions of animals to the wild and exotic pet trade. Animals are captured from their native habitat and transported to various countries to be sold as “pets”. Others are surplus animals from zoos or their offspring. Backyard breeders also supply exotic animals. The sellers of these animals often disregard state or local laws regulating private possession of exotics,  and the dangers, difficulties, physical and physiological needs of the animals they peddle. The suffering of the animals in the hands of unqualified and hapless buyers appears to be of no concern in the lucrative exotic pet trade. The animals also pose safety risks to humans.

Frogs are also victims of the animal entertainment industry, placed on display in zoos, aquariums, businesses and nature centers. They are removed from their natural habitat; depriving them of the ability to freely engage in instinctual behaviors. Both children and adults are desensitized to animal mistreatment by the animal entertainment industry. Even under the best of circumstances, captivity is cruel for wild animals. Confined to tiny areas and gawked at by crowds, animals in exhibits endure constant stress. They may suffer from temperature extremes and irregular feeding and watering. Without exercise, they become listless, their immune systems are weakened, and they become prone to sickness; many resort to self-mutilation in reaction to stress or boredom. Mental illness is rampant among confined animals. Torn from their families and deprived of all dignity, every part of their lives is controlled by their captors. While zoos may appear to be educational and conservation-oriented, most are designed with the needs and desires of the visitors in mind, not the needs of the animals.