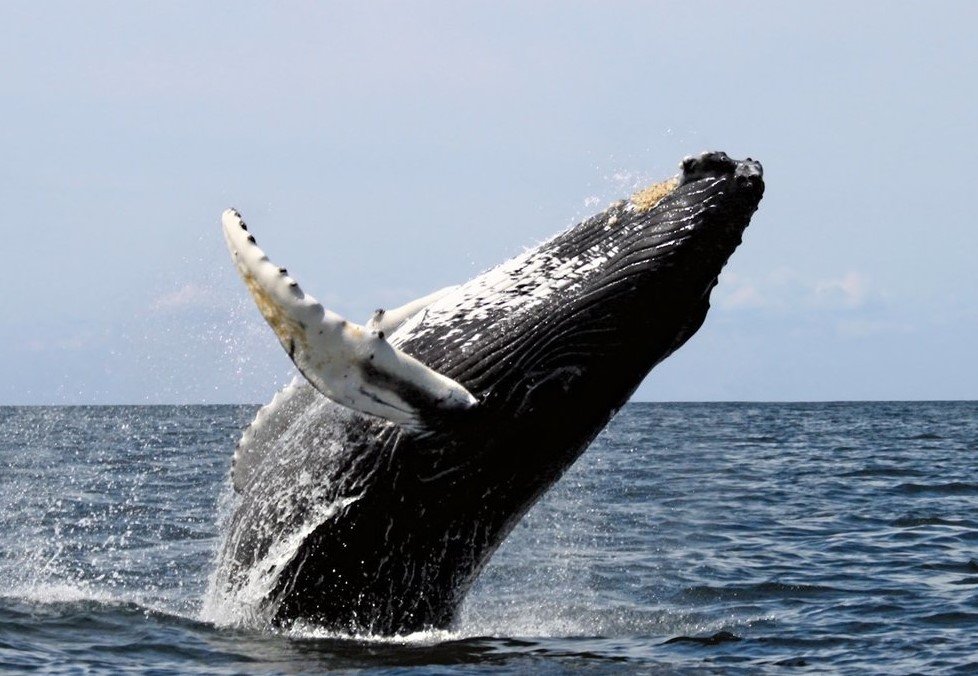 The humpback whale is black or gray with a white, grooved underbelly. Megaptera means 'giant wings' and refers to the their large front flippers, which are up to 15 feet. Humpback whales measure 35 to 48 feet long and weigh up to 65 tons. The female is larger than the male. In the 1870s humpback whales numbered around 125,000, but early in the 20th century whaling drastically reduced the population. Humpbacks now number around 5,000 to 7,500.

The humpback whale is capable of living up to 95 years. They are found in all the world's oceans. Humpback whales migrate annually from the tropics to polar regions.

Humpbacks sometimes engage in social hunting in which several whales encircle a school (group) of fish and blow bubbles that form a 'net' around the fish, then move in with their mouths open to devour their prey. Their favorite foods include krill and small schooling fish such as herring and mackerel, consuming between 2,000 and 9,000 pounds a day.

The 'songs' of humpback whales are complex vocalizations made only by the males. Humpbacks are well known for hurling their massive bodies out of the water in magnificent displays called breaching. Scientists are unsure why humpbacks breach, but believe it may be related to courtship or play activity.

Humpback whales mate during winter migration to warmer waters. Eleven to 12 months later the female gives birth to a single calf, weighing about two tons and measuring up to 13 feet long.

Whales suffer from illegal whaling, entanglement in fishing nets and death from pollution.


Due to the danger of extinction facing many whale species, the IWC voted to suspend all commercial whale hunting beginning in 1986. Despite this international agreement to stop killing whales for their parts, several countries continued to kill whales and sell their meat and parts, including Norway, Iceland and Japan.