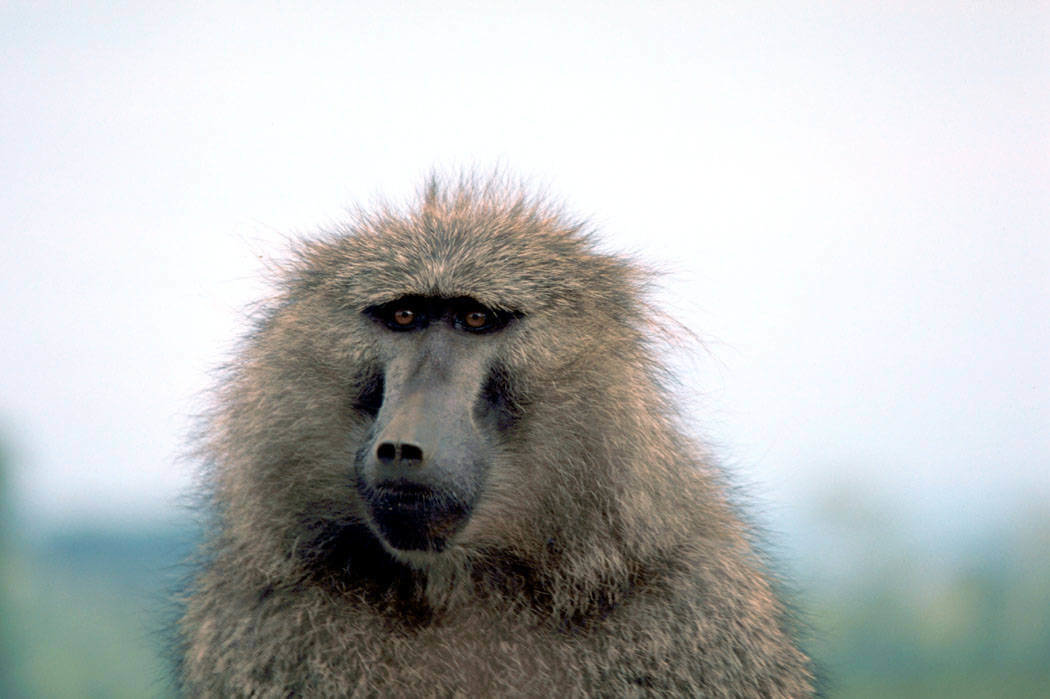 The baboons are some of the largest non-hominid members of the primate order; only the Mandrill and the Drill are larger. Baboons have long dog-like muzzles, close-set eyes, heavy powerful jaws, thick fur except on their muzzle, a short tail and rough spots on their rear-ends called ischial callosities. These calluses are nerveless, hairless pads of skin which provide for the sitting comfort of the baboon (and other Old World monkeys). Males of the Hamadryas Baboon species also have a large white mane. There is considerable variation in size and weight depending on species. The Chacma Baboon can be 47 inches and weigh 90 lb, while the biggest Guinea Baboon is 20 inches and weighs only 30 lb. In all baboon species there is pronounced sexual dimorphism (differences between males and females), usually in size but also sometimes in color or canine development.

Baboons are terrestrial (ground dwelling) and are found in savanna, open woodland and hills across Africa. Their diet is omnivorous, but is usually vegetarian. They are foragers and are active at irregular times throughout the day and night. They can raid human dwellings and in South Africa they have been known to prey on sheep and goats. Their principal predators are man and the leopard, although they are tough prey for a leopard and large males will often confront them. Baboons in captivity have been known to live up to 45 years, while in the wild their life expectancy is about 30 years.

Most baboons live in hierarchical troops of 5 to 250 animals (50 or so is common), depending on specific circumstances, especially species and time of year. The structure within the troop varies considerably between Hamadryas Baboons and the remaining species, sometimes collectively referred to as savannah baboons. The Hamadryas Baboon has very large groups comprised of many smaller harems (one male with four or so females), to which females from elsewhere in the troop are recruited while still too young to breed. The other baboon species have a more promiscuous structure with a strict dominance hierarchy based on the female matriline. The Hamadryas Baboon group will typically include a younger male, but he will not attempt to mate with the females unless the older male is removed. Baboons can determine from vocal exchanges what the dominance relations between individuals are. When a confrontation occurs between different families or where a lower-ranking baboon takes the offensive, baboons show more interest in the exchange than exchanges between members of the same family or when a higher-ranking baboon takes the offensive. This is because confrontations between different families or rank challenges can have a wider impact on the whole troop than an internal conflict in a family or a baboon reinforcing its dominance.

Baboon mating behavior varies greatly depending on the social structure. In the mixed groups of savannah baboons, each male can mate with any female. The allowed mating order among the males depends partially on the ranking, and fights between males are not unusual. There are however also subtler possibilities; some males try to win the "friendship" of some females. To garner this friendship, they may help groom the female, help care for her young, or supply them with food. Some females actually prefer such "friendly" males as mates.

A female initiates mating by presenting her swollen rump to the male. But 'presenting' can also be used as a submissive gesture and is observed in males as well. In the harems of Hamadryas baboons, the males jealously guard their females, to the point of grabbing and biting the females when they wander too far away. Despite this, some males will raid harems for females. In such situations it often comes to aggressive fights by the males. Some males succeed in taking a female from another's harem. This is called a 'takeover'.

Usually every other year, and after an approximately six month gestation, the female gives birth to a single young. The young baboon weighs approximately one kilogram and is colored black. The females tend to be the primary caretaker of the young, although several females will share the duties for all of their offspring. In mixed groups males sometimes help in caring for the young of the females they are "friendly" with, for instance they gather food for them and play with them. The probability is high that those young are their offspring. After about one year, the young animals are weaned. They reach sexual maturity in five to eight years. Males leave their birth group usually before they reach sexual maturity; females are 'philopatric' and stay in the same group their whole life.

Baboons are killed because of their tendency to be viewed as agricultural pests, as well as for their skins. Use of baboons in laboratories and medical research has also increased. Habitat loss due to overgrazing, agricultural expansion, irrigation projects and overall human settlement growth is also a threat to baboons.

These wild animals are bred in captivity and taken from their mothers within hours or days of birth, or stolen from their mother in the wild who is often killed in the process. Sold like toys by unethical businesses and backyard breeders, profit is put above the welfare of the animals.

Unprepared guardians purchase the animals, often with little knowledge on primate care. Adorable baby monkeys quickly grow into aggressive and territorial adults. Guardians often resort to drastic measures to control the animals, such as inhumane tooth removal. Eventually they are abandoned, given to roadside zoos or sold to another unprepared family where the cycle begins again. They end up living their lives in tiny cages, isolated, lonely, deprived of their wild nature and social interaction with their own kind.

BABOONS IN THE ENTERTAINMENT INDUSTRY