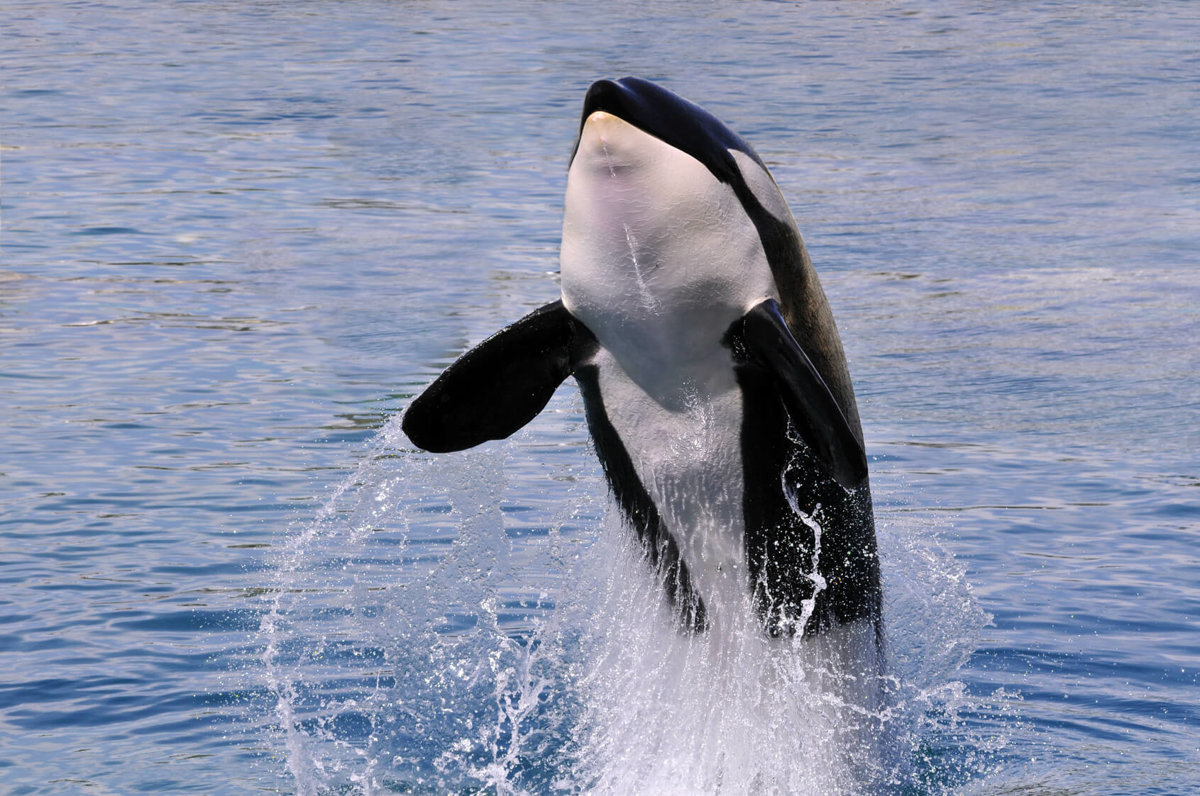 Majestic sea dwellers, superb hunters and socially complex beings, orcas (also known as killer whales or blackfish) are the largest members of the oceanic family Delphinidae, which includes dolphins, pilot whales, melon-headed whales and false killer whales. They’re found in every ocean in the world and most seas as well, including the Arctic and Antarctic regions and the warmer seas of the Mediterranean and Arabian, but have been counted in highest densities in the North Atlantic and Pacific oceans, in the Gulf of Alaska and Southern Ocean. Although they can have an enormous range, they typically tend to prefer to stay closer to coastal areas versus swimming in deeper ocean waters.

Their striking coloration is what makes the orca most recognizable; they have a black back with a white chest and sides, and a distinctive white area above and behind their eye. Large, paddle-like pectoral fins assist in fine manoeuvring , while sharp teeth and strong jaws allow them to firmly hang on to thrashing prey. With a robust skeletal frame, an orca’s body is much heavier and larger than a dolphin’s, and they have an erect dorsal fin that can stand as tall as 2 meters in height for some males, over 6 feet. Males are generally larger, and can range from 7 to 9 meters long (20 to 30 feet) and may weigh as much as 6 tons. Female orcas are smaller in size, around 6 to 8 meters (20 to 26 feet) in length and weighing between 3 and 4 tons, with a shorter, more triangular dorsal fin. Their size and strength make them capable of swimming at some of the fastest speeds among all marine mammals; some whales can actually reach swimming speeds of over 55 km/hour.

Unlike some other oceanic residents, orcas have excellent eyesight both above and below water, as well as well developed senses of hearing and touch. In addition, they use echolocation (a series of audible clicks) to locate their prey and navigate around obstacles in the water. Orcas are also adaptable to a variety of water temperatures. Although they have an average body temperature between 36 to 38 °C (97 to 100 °F), they also have a thick layer of blubber that acts as insulation between them and the elements. Orcas swimming close to the surface have a faster average heartbeat than when submerged – 60 beats per minute versus 20 beats per minute. Their lifespan in the wild depends on a number of factors, but females tend to live an average of 50 years, and males around 29 years.

Interestingly, there are three to five different subgroups (perhaps even subspecies) of orcas themselves, with variances in appearance, prey preference and hunting behavior that make each subgroup unique. Resident orca populations tend to have rounded dorsal fin tips ending in a sharp corner, eat mainly fish and squid, live in strongly bonded family groups (pods), and visit the same areas on a consistent basis. Transient orcas, on the other hand, are far more migratory and travel in smaller groups. They tend to have less complex dialects of vocalizations, too. In appearance, they have a distinctive solid grey area around their dorsal fins, which are more triangular and pointed than resident orcas’. Finally, offshore orca populations travel further from shore, feeding mainly on schooling fish, but also hunting other mammals and sharks. They tend to gather in much larger groups ranging from 20 to 75 in number, and they tend to be smaller in size than both resident and transient orca populations. The lifestyle of these different populations seems to be closely linked with their diet preference – for example, fish-eating whales in northern waters have close social structures, while orcas in Argentina that prefer to eat mammals behave more like transient whales.

While orcas may appear to look similar, their prey preference can be tremendously varied, though often specific to a certain population. Fish, squid, mammals, sea birds, sea turtles, rays, and even larger whales and sharks may be on the orca prey menu. Unfortunately for their chosen food, they’re also skilled and cooperative hunters that travel in packs to capture their prey. Different types of orcas also use different and specialized hunting techniques; Norwegian killer whales use a method called carousel feeding, for example, where they herd herring into a ball with nets of bubbles, then slap the fish with their tails to stun or kill them. Whale and shark hunting orcas will stalk their prey as a group, separating them and forcing them into immobility (in the case of sharks) or not allowing them to surface, causing them to drown. Finally, mammal-feeding orcas (who feed on seals, penguins, sea lions and sea otters) disable their prey by throwing it, slapping it with their tails, ramming it or breaching and landing on it.

More than their unique hunting techniques, however, the rich and complex social structure of orcas is what fascinates most scientists and enthusiasts. In resident orca populations, pods typically consist of one to four related matriarchs and their descendants. Offspring live with their mothers for their entire lives, and as many as four generations may migrate and hunt together, using the same dialect to communicate with each other. Several pods may come together to form clans, which are groups that share similar dialects (languages) of vocalizations. Transient orca societies tend to be smaller, however; usually made up of a single female and one or two of her offspring, though males tend to stay with their mothers for a longer period of time.

Orcas usually only leave their societal groups for short periods of time, either to hunt, or to mate. Female orcas reach sexual maturity at around age 10, and gestation of orca calves lasts anywhere from 15 to 18 months long, with a single offspring birthed around once every five years for a fertile female. The first seven or eight months are critical for calves; 37% to 50% of all orca calves die before they reach their first birthday. Females begin weaning their calves at around 12 months, and most calves are completely weaned by age two. All the members in a pod (both male and female) help to care for the young orcas, playing with them, teaching them hunting skills, and using particular family calls to help familiarize new calves with the pod dialect. The females tend to reach the end of their breeding years around age 40, but many go through menopause and continue to thrive for decades after they’re no longer fertile.

Recent studies have found that orcas are among the most contaminated marine mammals in the world. Pollution and chemical contamination make orcas more susceptible to disease and likely cause reproductive difficulties.

Human activity is the largest threat to populations of orcas, although the IUCN has lately recognized that they need more data on individual orca types, as they may actually be separate (and potentially endangered) species. Human fishing practices have resulted in the reduction of available prey for many orca populations, while pollution, oil spills, and noisy habitat disturbances (like military sonar use, shipping and drilling) are significant concerns for orcas all over the world. The southern resident community, made up of three pods that live in the Georgia and Haro Straits and Puget Sound, has been listed as an endangered population under the EDA in the last decade, while The Alaska and Prince William Sound resident orca pods were so devastated by the Exxon Valdez spill that the entire population in that region is expected to eventually die out.

Hundreds of orcas, dolphins and other members of the dolphin family are held in captivity in the United States. While the Marine Mammal Protection Act (MMPA), passed in 1972, makes it more difficult to capture marine mammals from the wild, aquariums can still apply for permits or import animals caught in other countries. Whether wild caught or captive born, orcas and dolphins in captivity are sentenced to a life of confinement deprived of normal social and environmental interaction. Captured orcas and dolphins are confined to tanks as small as 24 feet by 24 feet wide and 6 feet deep. In tanks, the reverberations from their own sonar bouncing off walls drives some orcas and dolphins insane. Tanks are kept clean with chlorine, copper sulfate, and other harsh chemicals that irritate animals' eyes, causing many to swim with their eyes closed. Captured dolphins and orcas are often forced to learn tricks through food deprivation. Marine parks may withhold up to 60 percent of food before shows so that the animals will be "sharp" for performances. The stress of captivity is so great that some commit suicide.