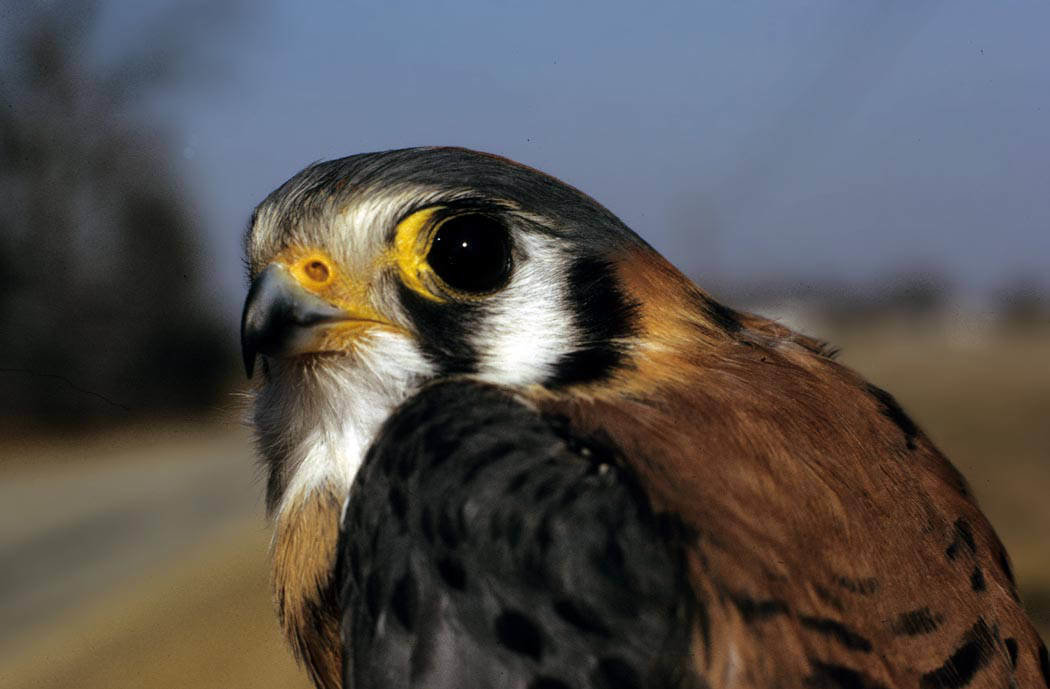 The name kestrel is given to several different members of the falcon genus, Falco. Kestrels are most easily distinguished by their typical hunting behavior which is to hover over open country and swoop down on prey, usually small mammals, lizards or large insects. Other falcons are more adapted to active hunting on the wing. Kestrels require a slight headwind in order to hover, hence a local name of windhover for common kestrel.

A falcon is any of several species of bird of the genus Falco, such as the peregrine falcon, which are raptors or birds of prey. These birds have thin, pointed wings which allow them to dive at extremely high speeds. Peregrine falcons, the fastest birds on earth, are said to have reached speeds of up to 200 mph. Other falcons include the gyrfalcon, Lanner falcon, and the Merlin. Some small insectivorous falcons with long, narrow wings are called hobbies, and some which hover as they hunt for small rodents are called kestrels. The falcons are part of the family Falconidae, which also includes the caracaras, laughing falcon, forest falcons, and falconets.

Kestrels' ability to spot prey is enhanced by being able to see ultra-violet which is strongly reflected by vole urine. Plumage typically differs between male and female, and (as is usual with monogamous raptors) the female is slightly larger than the male. This allows a pair to fill different feeding niches over their home range.

Kestrels are bold and have adapted well to human encroachment, nesting in buildings and hunting by major roads. Kestrels do not build their own nests, but use nests built by other species.

The peregrine falcon became endangered because of the overuse of pesticides during the 1950s and 1960s. Pesticide build-up interfered with reproduction, thinning eggshells and severely restricting the ability of birds to reproduce. The DDT buildup in the falcon's fat tissues would result in less calcium in the eggshells, leading to flimsier, more fragile eggs. In several parts of the world, this species was wiped out by pesticides. Eggs and chicks are often targeted by thieves and collectors.

Wildlife services around the world organized peregrine falcon recovery teams to breed them in captivity. The birds were fed through a chute so they could not see the human trainers. Then, when they were old enough, the box was opened. This allowed the bird to test its wings. As the bird got stronger, the food was reduced because the bird could hunt its own food. This procedure is called hacking. To release a captive-bred falcon, the bird was placed in a special box at the top of a tower or cliff ledge. Worldwide recovery efforts have been remarkably successful.

In the United States, the banning of DDT eventually allowed released birds to breed successfully. The peregrine falcon was removed from the U.S. Threatened and Endangered Species list on August 25, 1999. In 2003, some states began issuing limited numbers of falconry permits for peregrines due to the success of the recovery program. In the UK, there has been a good recovery of populations since the 1960s.