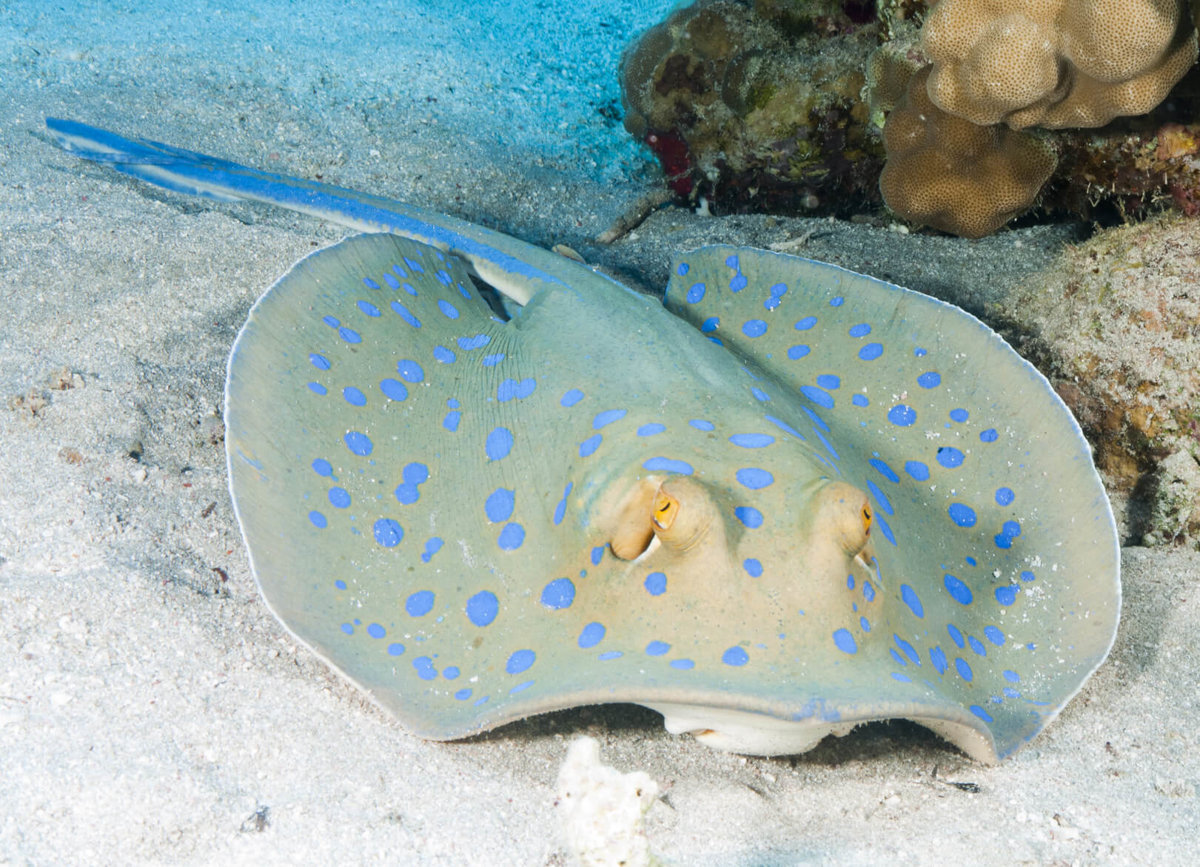 Dasyatidae is a family of rays, cartilaginous marine fishes. Dasyatids are common in tropical coastal waters throughout the world, and there are fresh water species in Asia (Himantura sp.), Africa, and Florida (Dasyatis sabina).


Dasyatids swim with a "flying" motion, propelled by motion of their large pectoral fins (commonly referred to as "wings"). Their stinger is a razor-sharp, barbed or serrated cartilaginous spine which grows from the ray's whip-like tail (like a fingernail). It is coated with a toxic venom. This gives them their common name of stingrays.

Dasyatids do not attack aggressively, or even actively defend themselves. When threatened, their primary reaction is to swim away. However, when they are attacked by predators or stepped on, the barbed stinger in their tail is mechanically whipped up, usually into the offending foot; it is also possible, although less likely, to be stung "accidentally" by brushing against the stinger.

Contact with the stinger causes local trauma (from the cut itself), pain and swelling from the venom, and possible infection from parts of the stinger left in the wound, as well as from seawater entering the wound. It is possible for ray stings to be fatal if they sever major arteries, are in the chest or pelvic region, or are improperly treated. Their stingers are normally ineffective against their main predator, sharks.

Treatment for stings includes hot water (as hot as the victim can stand), which helps ease pain and break down the venom, and antibiotics. Pain normally lasts up to 48 hours but is most severe in the first 30-60 minutes and may be accompanied by nausea, fatigue, headaches, fever, and chills.

Like other rays, dasyatids are viviparous (bearing live young in litters of 5–13). When a male is courting a female, he will follow her closely, biting at her pectoral disc. He then places one of his two claspers into her valve. The female holds the embryos in the womb without a placenta. Instead, the embryos absorb nutrients from a yolk sac, and after the sac is depleted, the mother provides uterine "milk".

Since their eyes are on top of their head, and their mouths on the bottom, they cannot see their prey, and instead use their sense of smell and electro-receptors similar to those of the shark. They feed primarily on mollusks and crustaceans, as their mouths contain powerful, shell-crushing teeth, or occasionally on smaller fish. Rays settle on the bottom while feeding, sometimes leaving only the eyes and tail visible.

Dasyatids are not normally visible to swimmers, but divers and snorkelers may find them in shallow sandy waters; more so when the water is unseasonably warm.